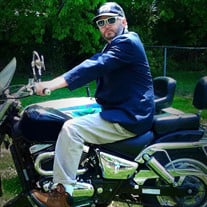 Wesley Andrew Kilgore (36), beloved father, son, and brother, passed away suddenly in a tragic car accident on June 2, 2021. Wesley (Wes) was born on August 14, 1984 to Alfred Allen and Judy Frances Kilgore (Jones) in Nashville, TN. He was a resident of Greenbrier, TN and was a Greenbrier High School 2003 graduate. After high school, Wes earned a specialized Auto Body Repair & Design Degree from Tennessee Technological Center where he graduated in the top five percent of his class as well as a Commercial Art degree from Nossi College of Art. Wes was a gifted artist with a unique perspective. His talents extended across many forms of art including painting, sketching, graphic design, web and video as well as auto body detailing. He also wrote, recorded and performed his own music. Wes went on to become a commissioned artist who showed his paintings at Nashville’s Downtown Art Crawl and whose clients included Graham Entertainment, Vestavia Hills High School and multiple independent music artists. Wes was a 2006 Oracle Award Winner and also served as the concept artist for the 15th Annual Tin Pan South Songwriters Festival. His designs appeared locally, regionally and nationally, across all brand collateral and promotion for the festival. Wes felt that his greatest achievement; however, was his little girl Audrey who he loved more than anything else in this world. He will be remembered as a doting, nurturing and proud father and as a genuine and honest person who was fiercely protective of the people he cared about. He’ll be remembered for his tender heart, his love of animals, his awesome dance moves, his wit, his wicked sense of humor, his mischievous smile and his many loveable eccentricities. Wes will also be remembered for his act of bravery in the final moments of his life, when he selflessly reached over and shielded his daughter from the impact of the collision that ultimately took his life. Wes is survived by his daughter Audrey (Greenbrier, TN), mother Judy Kilgore (Greenbrier, TN), sister Natalie Kilgore (Nashville, TN) as well as his aunts, cousins and many true friends. He is preceded in death by his father, Alfred Kilgore (Greenbrier, TN). Visitation will be held on Monday, June 7 from 4 pm – 8 pm at Austin & Bell Funeral Home in Springfield, TN. Funeral services will be held on Tuesday, June 8 at 11 am in the chapel of Austin & Bell Funeral Home Springfield with Rev. David Evans officiating. The family will receive visitors prior to the funeral from 9 am to 11 am that day. Burial will follow in the Robertson County Memorial Gardens with some of Wesley’s closest friends serving as pallbearers immediately after the service.

Wesley Andrew Kilgore (36), beloved father, son, and brother, passed away suddenly in a tragic car accident on June 2, 2021. Wesley (Wes) was born on August 14, 1984 to Alfred Allen and Judy Frances Kilgore (Jones) in Nashville, TN. He was a... View Obituary & Service Information

The family of Wesley Andrew Kilgore created this Life Tributes page to make it easy to share your memories.

Send flowers to the Kilgore family.