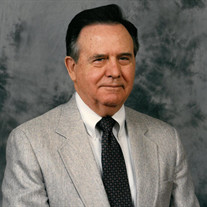 Warren G. Hayes, M.D., 96, of Springfield, TN, passed away, Friday, June 29, 2018. at his home surrounded by family. He was devoted to his family and leaves behind his loving wife, Mary, married for 72 years; children: Richard L. Hayes of Springfield, and Marilyn S. Hayes of Nashville, granddaughter: Krista N. Hayes, Springfield, and great-granddaughter, Kendra N. Hayes of Springfield. Warren was born December 16, 1921 in Braggs, Oklahoma to Lee Hamilton Hayes and Ethel (Griffin) Hayes. He was preceded in death by his parents, brothers: Ralph, Orville, Melvin, Howard, Allen, and twin sister, Juanita. A celebration of life service will be held at 10:00 AM, Monday, July 2 at First United Methodist Church, Springfield. Burial at 3:00 PM at Union Cemetery in Dickson. Visitation Sunday from 2:00PM – 5:00PM on July 1 at Austin and Bell Funeral Home, and for the hour before the service at the United Methodist Church. He graduated from Muskogee High School and then enlisted in the United States Army. Warren served in the Pacific Rim Theater during World War 11. While stationed for training at Camp (now Fort) Campbell, Warren and some other soldiers spent a weekend furlough at a boarding house in Vanleer Tennessee. On Sunday, he walked to the local Methodist Church for services. A soldier home on leave invited Warren home for a family meal; he probably never dreamed he’d meet the love of his life at that lunch. Warren served in the Pacific Rim Theater during World War 11. After discharge he returned to Middle Tennessee where he married Mary Frances Stokes on March 13, 1946, in Charlotte, TN. He received his undergraduate degree from the University of Tennessee in 1950, followed by his Medical Degree in 1958. After an internship at St. Thomas Hospital in Nashville, they moved to Springfield and Warren began practicing medicine. Retiring after 31 years of private practice in 1990, he continued his love of medicine by working for the Public Health Department across several counties for another 7 years. Warren was one of the charter members and a Lifetime Member of the American Academy of Family Practice; a member of the American Medical Association, The Tennessee Academy of Family Physicians, and the Tennessee Medical Association. He served one term as Assistant Chief of Staff, and two terms as Chief of Staff at Jesse Holman Jones Hospital. He was Medical Director at NHC Nursing Home for many years. A committed follower of Christ, he was an active member of the First United Methodist Church of Springfield where he served several terms on the Board of Directors, the Board of Trustees and the Pastor Parish Committee, and was a member of the Jim Porter Sunday School Class. A twenty plus year member of Springfield Rotary Club, he was a Paul Harris fellow. He was also a 3rd Degree Mason, a Scottish Rite, a member of the Western Star Lodge, and a Shriner in the Al Menah Temple. The family would like to thank Dr. Rainwater, the staff at Northcrest Hospital, Alive Hospice, and all the wonderful professional and caring sitters: Debby Goldberg, Delinda Bell, Nan Burgess, Michele Carpentier, Julie Ford, Virginia Foster, Navita Hill, and Mary Oakley. If so desired memorial contributions may be made to Springfield First United Methodist Church. Any donations may be sent in c/o Austin & Bell. Austin & Bell Funeral Home in Springfield is in charge of these arrangements. AUSTIN & BELL FUNERAL HOME- 509 WALNUT STREET, SPRINGFIELD, TN (615) 384-1000

Warren G. Hayes, M.D., 96, of Springfield, TN, passed away, Friday, June 29, 2018. at his home surrounded by family. He was devoted to his family and leaves behind his loving wife, Mary, married for 72 years; children: Richard L. Hayes of Springfield,... View Obituary & Service Information

The family of Warren Hayes, MD created this Life Tributes page to make it easy to share your memories.