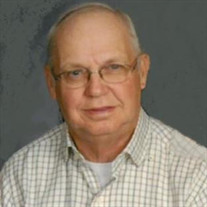 Tommy Lloyd “Gravy” Freeman, age 76, of Springfield, passed away Sunday, April 10, 2022 at Vanco Manor in Goodlettsville. Funeral Services will be held Saturday, April 16, 2022 at 2pm in the chapel of the Austin & Bell Funeral Home in Springfield with Brother Ronnie Green officiating. Burial will follow in the Mt. Sharon Cemetery with Daryl Freeman, Jonathan Freeman, Jackie Sherrod, Charles Bibee, Timmy Hutton, Charles Hutton, Spencer Hutton and Chad Freeman serving as pallbearers. Visitation will be held at the funeral home on Saturday from 10am until the hour of service at 2pm. Mr. Freeman was born September 11, 1945 in Greenbrier to the late Samuel and Ekie Byzet Freeman. He worked as a pipe fitter for the Local 572 Union and was a member of the Cedar Hill Baptist Church. Mr. Freeman loved his family and was very proud of his sons and his grandsons. He was always kind and caring, always ready to help anyone who needed it. He loved to work and was always busy doing something. In addition to his parents Mr. Freeman is preceded in death by his brothers, Samuel Freeman, Bruce Freeman and John Allen Freeman; and his sisters, Martha Hays and Bettye Pedigo. Mr. Freeman is survived by his wife of 57 years, Dorothy Taylor Freeman; sons and daughter-in-law, Michael Lloyd and Clisa Freeman, Tommy Allen Freeman and Jeffrey Dale Freeman; brother and sister-in-law, David L. and Dianne Freeman; sister-in-law, Barbara Freeman; and grandchildren, Kyle Branden Freeman and John Michael Freeman. Mr. Freeman is also survived by his good friends and working buddies, Paul Graves and Van McCormack, and his nieces and nephews who will all miss him very much. Austin & Bell Funeral Home in Springfield is in charge of these arrangements. AUSTIN & BELL FUNERAL HOME- 509 WALNUT STREET, SPRINGFIELD, TN (615) 384-1000

The family of Tommy Freeman created this Life Tributes page to make it easy to share your memories.

Send flowers to the Freeman family.