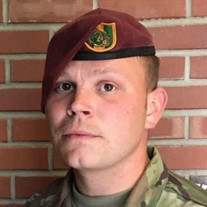 SSG Thomas James Johnson, age 31 of Watertown, New York, formerly of Joelton, Tennessee died Monday, July 19, 2021 at his residence. Funeral services will be conducted at Austin & Bell Funeral Home in Pleasant View at 11:30AM on Thursday, August 5. Burial will follow at 2:00PM in Middle Tennessee State Veterans Cemetery in Nashville with full military honors. The family will receive friends at the funeral home on Thursday, August 5, from 9:00AM until the hour of service at 11:30AM. Thomas was born on May 28th, 1990 to James Francis, II and Cynthia Ann Shimko Johnson. He was actively serving in the U.S. Army. He was very patriotic and his childhood dream was to become a soldier. He became a senior rated Jumpmaster who loved everything Airborne. One of his proudest moments was when his father pinned his jump wings on him. He completed one tour to Afghanistan and two additional tours to the Middle East. His duty stations included Germany, Fort Bragg, JBER Alaska and Fort Drum. Thomas always had a love for history and was working on a degree in Military History. He loved his Tennessee Titans, Harry Potter, building Legos, and being on his boat. Thomas enjoyed spending time with family, friends, and his fur babies. He is preceded in death by his paternal grandparents, Squire and Wilma Johnson; and his maternal grandmother, Alice Shimko. In addition to his parents, he is survived by a son, Landon Maverick Johnson; daughter, Scarlett Liberty Johnson; mother of his children, Michelle Johnson; grandfather, John J. Shimko; brother, Jeffrey (Richard Young) Johnson; sister, Jill Marie Johnson; nephew, Oliver Lucas Johnson-Young; and many aunts, uncles, and cousins. If so desired, memorial contributions may be made to Tennessee State Veterans' Home, 250 Arrowood Drive, Clarksville, TN 37042 AUSTIN & BELL FUNERAL HOME in Pleasant View is in charge of local arrangements. 6316 Highway 41A, Pleasant View, Tennessee 37146 (615) 746-4433 www.austinandbell.com

The family of SSG Thomas James Johnson created this Life Tributes page to make it easy to share your memories.

Send flowers to the Johnson family.