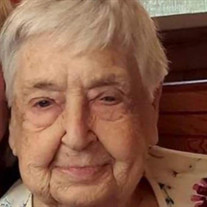 Ruby Mai Larmon, age 89, of Pontiac, Michigan, formerly of Springfield, Tennessee, passed away on Friday, February 4th, 2022, after a brief illness. Funeral services will be conducted at 2pm Saturday, February 12, 2022 in the chapel of Austin & Bell Funeral Home in Springfield, TN. Burial will follow in the Springfield Memorial Gardens. The family will receive friends from 3-8pm Friday, February 11, 2022 and again from 1pm until service time on Saturday at the funeral home. Ruby was born in Cheatham County, Tennessee on April 29, 1932, to Homer Felts Sr and Nellie Mae Felts and was the 3rd of 6 children. She grew up in Springfield, Tennessee, where she met Walter Larmon Jr and married him on Dec 8th, 1951. Their marriage produced 6 children. In October 1964, the family moved to Pontiac, Michigan where she resided until her death. Ruby was a devoted mother and Granny whose life revolved around her children and grandchildren. She was also a loving sister, aunt, and cousin and enjoyed staying in touch with them to find out what was going on 'down home' as she always referred to Springfield. She worked at a local corner store and a dry cleaners for many years where she became known to many who loved to spend a little extra time visiting with her when they came in because of her friendly smile, welcoming presence, and gift for gab. Ruby truly never met a stranger. She was a very strong woman who weathered many storms and always persevered. She will be greatly missed by all who knew her. Ruby is preceded in death by her parents, her husband, Walter, her brothers, Harold Felts, Ronald Felts, and her sisters, Frances Moon and Margie Sawyers. She is survived by her children, Sherry Cosby (Otis), Gerry Larmon, Jeffrey Larmon (Linda), Terry Larmon (Katrina), Sheila Haag (Butch), and Anthony Scott Larmon. She is also survived by her brother, Homer Felts Jr., 12 grandchildren, 3 great grandchildren, and many nieces, nephews, and cousins. Austin & Bell Funeral Home in Springfield is in charge of these arrangements. AUSTIN & BELL FUNERAL HOME- 509 WALNUT STREET, SPRINGFIELD, TN (615) 384-1000

Ruby Mai Larmon, age 89, of Pontiac, Michigan, formerly of Springfield, Tennessee, passed away on Friday, February 4th, 2022, after a brief illness. Funeral services will be conducted at 2pm Saturday, February 12, 2022 in the chapel of Austin... View Obituary & Service Information

The family of Ruby Mai Larmon created this Life Tributes page to make it easy to share your memories.

Send flowers to the Larmon family.