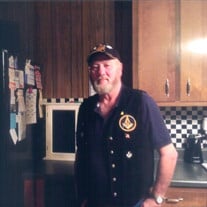 Ronnie E. Matthews, Sr. went to drive a truck in heaven September 10, 2021. He is survived by his wife, "Sweet Thing", Kathy Sue Matthews, who he was married to for 51 loving years; his son, Ronnie E. Matthews, Jr.; daughter, Misty Yancey; son-in-law, John Yancey; 3 loving grandkids, Cole Yancey, Ireland Yancey and "Trey" Matthews, III; sister, Mary Jo (Richard) Holland. Ronnie is preceded in death by his parents, Hugh Clyde & Ada Matthews; brother, James W. Matthews. Ronnie was born and raised in Nashville. He moved to White House, TN in 1984. Ronnie had a diehard work ethic until his death. He started driving a truck at the young age of 15, with his brother James. He drove a truck his entire life, and he worked for Maxim Crane Service as a long haul crane deliverer. At his passing, Ronnie was a security guard at the Highland Rim racetrack for many years. He was a dedicated baseball coach for his son and both of his grandsons. He was a role model and teacher to many. Ronnie became a Master Mason in 2008, serving as a Tiler, Steward, Head of the Fundraising Committee, and Santa's very own clown. Ronnie was a lot of things to many but he was mostly a loving husband, father and pawpaw. He was dedicated to being the Hero of his family. Any one that knew him knew he was always "The Life of the Party!" Visitation Sunday, September 12, 2021 4-8PM and Monday September 13, 2021 10AM-2PM at the funeral home. Masonic service 6PM Sunday in the chapel. Funeral service Monday 2PM in the chapel of Austin & Bell White House, with Pastor Kevin Brantley officiating. Interment to follow in White House Memorial Gardens with Cole Yancey, Ireland Yancey, Trey Matthews, John Yancey, Darryl Matthews and Russ Smith serving as pallbearers. ARRANGEMENTS ENTRUSTED TO AUSTIN & BELL 533 Highway 76 White House, TN 37188 (615)672-5000 www.austinandbell.com

The family of Ronnie E Matthews Sr. created this Life Tributes page to make it easy to share your memories.

Send flowers to the Matthews family.