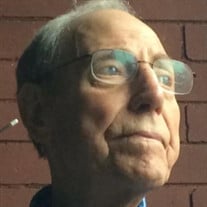 Robert Ernest "Bobby" Dodd, age 89, of Springfield, passed away peacefully Sunday, May 23, 2021. A service celebrating his life will be held at a later date. Bobby Dodd was the youngest of 15 children, being born January 2, 1932 in Springfield to the late William Byrd and Roberta Seay Dodd. He was retired from Ford Glass Plant. He was a veteran of the U.S. Air Force serving in the Korean War. He was a lifelong member of the Springfield First United Methodist Church. Bobby Dodd was also a 50 year plus Mason, being a member of Western Star Lodge # 9 in Springfield, the Scottish Rite of Nashville and a Shriner. He was a longtime member of the New Chapel Mens' Club. Bobby Dodd never met a stranger. He spent a lot of his 31 year retirement helping others. If you knew him at all he has probably done something for you. He fished as long as he could in between Mary Sue’s “honey do” lists. For a man who hated to travel, he got around….Florida, Mexico, the Grand Canyon, New York, London and other spots in between. If you asked, his favorite was Alaska. Bobby had a sense of humor. He knew laughter could set you at ease and make any situation better. He loved to laugh and cut up. The world was a much better place with Bobby Dodd in it. He truly was one of a kind and will be missed. In addition to his parents, Mr. Dodd is preceded in death by his beloved wife of 50 years, Mary Sue Farmer Dodd. He is survived by his daughter, Denise (Larry) Dodd Fletcher of Springfield; his sons, Mike (Jan) Dodd of Vestavia Hills, AL and Jeff (Luis) Dodd of St. Augustine, FL; grandchildren, Jamie (Heather) Ayres and Libby Kelly, and great-grandchildren, Gabe Kelly and Kasey Ayres. For the last 12 years he has enjoyed the friendship and companionship of Pat Long; and for that we are ever grateful. If so desired, memorial contributions may be made to the Springfield First United Methodist Church. Austin & Bell Funeral Home in Springfield is in charge of these arrangements. AUSTIN & BELL FUNERAL HOME- 509 WALNUT STREET, SPRINGFIELD, TN (615) 384-1000

Robert Ernest "Bobby" Dodd, age 89, of Springfield, passed away peacefully Sunday, May 23, 2021. A service celebrating his life will be held at a later date. Bobby Dodd was the youngest of 15 children, being born January 2, 1932 in Springfield... View Obituary & Service Information

The family of Robert Dodd created this Life Tributes page to make it easy to share your memories.

Send flowers to the Dodd family.