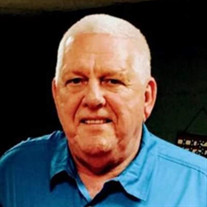 Phillip Earl Haley, age 69 of Greenbrier passed away Tuesday, February 16, 2021 at Skyline Medical Center. Funeral Services will be held at 6pm, Saturday, February 20th at Austin & Bell Funeral Home Greenbrier. The family will receive friends 2pm to 6pm on Saturday at the funeral home. There will also be a Funeral Service at 1pm on Wednesday, February 24, 2021 at the Haskel & Morrison Funeral Home, 208 Ferry Street, Vevay, IN 47043. Due to COVID-19, masks are required along with social distancing. Friends may call from 11:00 am - 1:00 pm, Wednesday, February 24, 2021, at the Haskel & Morrison Funeral Home 208 Ferry Street, Vevay, IN 47043. Phillip was born April 16, 1951 in Cedar Hill, TN. He was the 10th child born to Sharecroppers, the late Robert Lester & Emma Lou (Jackson) Haley. He was also preceded in death by baby brother, Lester Haley Jr., brother, Robert Henry Haley; sisters, Emma Laura Haley, Frances Balance and nieces Pansy Bledsoe and Stephanie Riddle. Phillip was a proud 1969 graduate of Adairville High School, Adairville, KY. Being raised on a farm, he learned the value of hard work which included everything from milking cows to mowing yards as a kid. Phillip is also a graduate of Bowling Green Vocational School with a degree in Electrical Work. He was a Journeyman and holds a Master Electrical License in the State of KY. Once Phillip became a member of Bethlehem Missionary Baptist Church in Goodlettsville you might say that he became the unofficial maintenance man. Thanks to Phillip the church is lite up like a Christmas tree. He added new lighting throughout the whole church. He installed security cameras and a LED light accent to the cross at the center of the church. He was also the beloved maintenance man for his sisters-in-law, Harriet and Alice Faye in IN as well as beloved friend, Martha Moore. Phillip retired from Tyson Foods in Goodlettsville, TN on August 1, 2020 where he was an Electrical Technician for 17 years prior to that he worked as the Maintenance Supervisor for BathFitter in Madison, TN. He worked at All American Homes in Springfield, TN. He also worked for Knight Electric in Russellville, KY as well Kendall Corporation in Bowling Green, KY. While at Kendall he made a machine that he could not get to work. He always worked things out in his sleep so he had his wife to write the answers down and the next day he completed the project and sold the rights to Kendall for $1,500.00. He also built a snake light in shop class in 1969. He was an inventor before his time and only wished he had a patent for the snake light. Phillip and Patty loved to fish, especially after purchasing their pontoon boat. They spent as much time as possible on the water at Lake Malone State Park near Dunmore, KY with his brother Jerry and his wife, Peggy. They also took their grandkids fishing as much as possible teaching them to catch crappie, even though he spent most of his time repairing their poles. He is survived by the love of his life, Patty Edwards Haley, whom he married on May 24, 2003 at Barren River State Park, Glasgow, KY; Children, Phillip Bruce (Deanna Engler Johnson) Haley of Auburn, KY, Christina (Bobby Douglas) Blake of Auburn, KY, Steven (Michelle) Shuler off Exeter, CA, David (January) Shuler of Franklin, KY, Daniel (Krissa Ennis) of Seymour, IN; 24 grandchildren and 5 great-grandchildren; sisters, Betty Sheldon of Springfield, TN, Martha Jane White of Springfield, TN; Barbara Hyams of Russellville, KY, Gracie Hyde of Greenbrier, TN; brothers Ernest Haley of Oakville, KY, Jerry Haley of Russellville, KY; brother-in-law and sister-in-law, Jimmy and Linda Riddle of Goodlettsville, TN and numerous nieces and nephews. Online condolences may be made at www.austinandbell.com

The family of Phillip E. Haley created this Life Tributes page to make it easy to share your memories.

Send flowers to the Haley family.