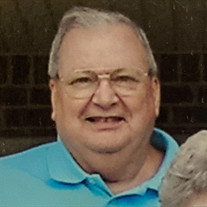 Philip Ernest Petty, age 78, of Springfield, passed away Wednesday, January 20, 2021 at NorthCrest Medical Center. A lakeside memorial service will be held this summer as his ashes will be spread at Old Hickory Lake per his wishes. Mr. Petty was born March 14, 1942 in Nashville, TN to the late Fred and Garnet Dysinger Petty. He was a story teller. From his days in Oedingen Germany as an Army private to his years in search of the biggest bass, to his on-the-job exploits as an electrician with the IBEW, he always had an anecdote or joke. His outgoing personality and friendly demeaner assured him of making lifelong friends. He was happy to hear your opposing opinion then tell you why you were wrong. He was a great Dad, ensuring we knew how to fish, set up a tent, beat another car off the line and wire a light fixture. He was a steadfast husband who loved his wife of 57 years. In his later years, when he could no longer fish, he bought a Spyder and toured the backroads as often as possible with his wife at his back, holding on for dear life. In his leisure time, he was a carpenter, a leather worker, a card player, a photographer and handy man. He brought both artistry and precision to his personal pursuits and could do anything he set his mind to. He will be dearly missed but never forgotten. In addition to his parents Mr. Petty is preceded in death by his brothers, Russell Petty and Roy Petty. He is survived by his wife, Carol Tolbert Petty; daughters, Kimberly D. Petty of Nashville, Connie M. Lockert of Ashland City and Angela (Michael) R. Petty of Nashville; sisters, Peggy (Joe) Greer of Smyrna and Ona Herndon of Loudon, TN; and grandson, Ryan (Krystal) Lockert. If so desired memorial contributions may be made to the Disabled American Veterans. Any donations may be sent in c/o Austin & Bell. Austin & Bell Funeral Home in Springfield is in charge of these arrangements. AUSTIN & BELL FUNERAL HOME- 509 WALNUT STREET, SPRINGFIELD, TN (615) 384-1000

Philip Ernest Petty, age 78, of Springfield, passed away Wednesday, January 20, 2021 at NorthCrest Medical Center. A lakeside memorial service will be held this summer as his ashes will be spread at Old Hickory Lake per his wishes. Mr. Petty... View Obituary & Service Information

The family of Philip Petty created this Life Tributes page to make it easy to share your memories.

Send flowers to the Petty family.