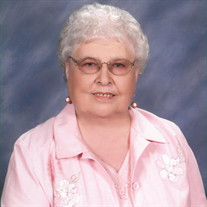 Patsy Jane Rawls Martin, age 87, passed away Sunday, April 4, 2021 in her home surrounded by her family. Funeral services will be held Wednesday, April 7, 2021 at 1pm in the chapel of the Austin & Bell Funeral Home with Brother Marvin Crouch officiating. Burial will follow in the Elmwood Cemetery with Barry Dean, Robbie Martin, Josh Martin, Gary Martin, Joseph Ochoa, Ricky Smith and Mike Smith serving as pallbearers. Visitation will be held at the funeral home on Tuesday, April 6, 2021 from 4-8pm and again on Wednesday from 11am until the hour of service. Born on October 11, 1933, Patsy was a lifelong resident of Robertson County and a lifelong member of the church of Christ. She was an avid traveler who loved all holidays, but most especially Christmas. Above all, her favorite thing to do was spend time with her beloved family. She is preceded in death by her parents Jewell and Clarice Rawls, and sisters Jean Dean and Peggy Henderson. A devoted mother and grandmother, she is survived by her children Carlene (Eugene) Henderson of Murfreesboro; Robert Martin, Jr. (Joyce) of Cedar Hill; and Gary Martin of Springfield; and grandchildren Briggette Ochoa of Nashville, Joshua (Miranda) Martin of Springfield, Jamie (Dustin) Ingle of Charlotte, Brittany (Zach) Moulton of Springfield, and Gena Henderson of Murfreesboro; three step-grandchildren; eight great-grandchildren and four step-great-grandchildren. She is also survived by her sister Carole (Bill) James of Greenbriar and numerous nieces and nephews. In lieu of flowers the family requests donations be made to the St. Jude Children’s Hospital. Any donations may be sent in c/o Austin & Bell. Austin & Bell Funeral Home in Springfield is in charge of these arrangements. AUSTIN & BELL FUNERAL HOME- 509 WALNUT STREET, SPRINGFIELD, TN (615) 384-1000

Patsy Jane Rawls Martin, age 87, passed away Sunday, April 4, 2021 in her home surrounded by her family. Funeral services will be held Wednesday, April 7, 2021 at 1pm in the chapel of the Austin & Bell Funeral Home with Brother Marvin Crouch... View Obituary & Service Information

The family of Patsy Martin created this Life Tributes page to make it easy to share your memories.

Send flowers to the Martin family.