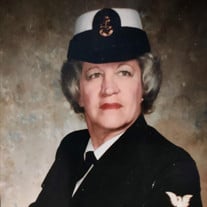 Age 87, of Cross Plains passed away Wednesday, April 28, 2021 at NHC in Hendersonville. She was born March 13, 1934 in Louisville, KY to Clayton Abernathy Compton, Jr. & Sarah Elizabeth Hart. She worked 20+ years for Bell South and was credited for saving the life of a baby over the phone, when she worked as a telephone operator. Ms. Long was retired from the U.S. Navy, where she attained the rank of Senior Chief. She was a member of the American Legion Post #206 in White House, where she served over approximately 20 years as Post Service Officer. She also served on the Executive Committee and served as Post Commander. Pat was also very active in the Eastern Star and worked as a professional clown. She also loved dogs and was a member of Jesus Reigns Fellowship, where she attended. She is preceded in death by her parents; sister, Maurine Russell; nephew; Howard Russell. She is survived by her brothers, Clayton (Johnnie) Compton, Louisville, KY and Stephen (Odell) Compton, Crestwood, KY; sister, Estelle (Gordon) Quisenberry, Louisville, KY; 12 nieces and nephews;23 great nieces and nephews; 6 great-great nieces and nephews and a young lady she loved like a daughter, Marissa Hundley. Funeral service is scheduled for Monday, May 3, 2021 at 3pm in the chapel of Austin & Bell Funeral Home in White House with Pastor Chet Murrell officiating. Interment will be held Tuesday, May 4, 2021 at 10am in Middle Tennessee Veteran's Cemetery with full military honors. Visitation is planned for Monday, May 3, 2021 12pm-3pm at the funeral home. In lieu of flowers memorial contributions are requested to St. Jude Children's Research Hospital or to Shriner's Hospital for Crippled and Burned Children. ARRANGEMENTS ENTRUSTED TO AUSTIN & BELL 533 Highway 76 White House, TN 37188 (615)672-5000 www.austinandbell.com

Age 87, of Cross Plains passed away Wednesday, April 28, 2021 at NHC in Hendersonville. She was born March 13, 1934 in Louisville, KY to Clayton Abernathy Compton, Jr. & Sarah Elizabeth Hart. She worked 20+ years for Bell South and was credited... View Obituary & Service Information

The family of Patricia Compton Long created this Life Tributes page to make it easy to share your memories.

Send flowers to the Long family.