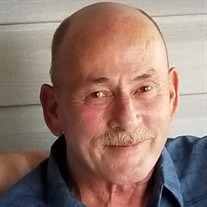 "Mickey" age 63 of White House passed away Tuesday, June 15, 2021 at St. Thomas Midtown. He was born January 15, 1958 in Hardin County, KY to Michael Daniel & Mary Lou Nall Padgett. He worked as a truck driver for USF Holland before his retirement and was a member of Local #480 Teamsters Union. He was very proud to have received his second jacket for two million miles of driving. He was an avid golfer, loved traveling, enjoyed riding his Harley and tinkering around in his garage. He was preceded in death by his parents; sisters, Donna Houk & Cathy Padgett; brother, Danny Padgett. He is survived by his wife, Shirley Padgett, White House, TN; son, Ahren (Katie) Padgett, Louisville, KY; sister, Karen Webster, Richmond, KY; 3 grandchildren, Cody Hoover, Courtney Hoover and David Simms. Funeral service is scheduled for Monday, June 21, 2021 at 2pm in the chapel of Austin & Bell Funeral Home in White House. Visitation is planned for Monday, June 21, 2021 10am until the time of the service at the funeral home. ARRANGEMENTS ENTRUSTED TO AUSTIN & BELL 533 Highway 76 White House, TN 37188 (615)672-5000 www.austinandbell.com

The family of Michael Joseph Padgett created this Life Tributes page to make it easy to share your memories.

Send flowers to the Padgett family.