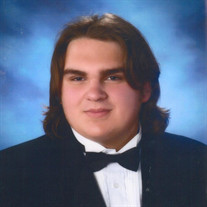 Michael Hunter “Buddy” Hand, age 22, of Greenbrier, passed away Friday, January 14, 2022 at NorthCrest Medical Center in Springfield. Funeral services will be held Friday, January 21, 2022 at 2pm in the chapel of the Austin & Bell Funeral Home in Springfield with Brother Jim Clark officiating. Burial will follow in the Mt. Sharon Cemetery with Mark Hand, Jr., Kyle Wix, Logan Roach, Chad Curtis, Jeff Kinle and Jamie Bobela serving as pallbearers. Honorary pallbearers will be Jason Warden, Dalton Hand, Bailey Glasener and Bobby Hand Jr.. Visitation will be held at the funeral home on Thursday, January 20, 2022 from 3-7pm and again on Friday from 12pm until the hour of service at 2pm. Mr. Hand was born October 22, 1999 in Springfield to Mark and Julie Hunter Hand, Sr. of Coopertown. He worked for the City of Coopertown. He took guitar lessons and learned how to play very well. He later became a professional arm wrestler with his brother, Mark, and his good friend, Kyle Wix. His passion since he was a little boy was to become a professional wrestler so he began working with TNT Wrestling and trained hard. When he was given the chance to wrestle in matches he loved it. Buddy loved his family and friends. He was a very special person and would help anyone. He will truly be missed. Mr. Hand is preceded in death by his grandparents, J.C. and Lucille Hand, and Janie Warden; and great-grandparents, Pete and Mary Hunter and Delphie Blick. In addition to his parents, Mr. Hand is survived by his brother and sister-in-law, Mark and Christina Hand, Jr.; very close uncle, Jason Warden; niece, Anna Hand; and nephew, Dalton Hand. In lieu of flowers memorial contributions may be made to the Michael “Buddy” Hand Funeral Fund. Any donations may be sent in c/o Austin & Bell. Austin & Bell Funeral Home in Springfield is in charge of these arrangements. AUSTIN & BELL FUNERAL HOME- 509 WALNUT STREET, SPRINGFIELD, TN (615) 384-1000

The family of Michael Hand created this Life Tributes page to make it easy to share your memories.

Send flowers to the Hand family.