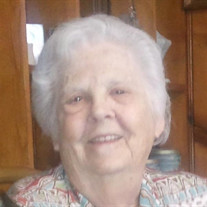 Age 92 of Cross Plains passed away Sunday, November 27, 2016 at her sister's home. She was born May 20, 1924 in Sumner County, TN to Charles Vernon & Maggie Lou West Wilson. She worked for Acme Boot in their boot repair department until her... View Obituary & Service Information

The family of Mary Jewel Wilson Taylor created this Life Tributes page to make it easy to share your memories.