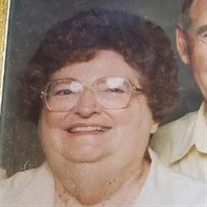 Altha Marie Nash was born in Springfield, Tennessee, on September 25th, 1930. She would stop us right now and say that she never liked the first name of Altha, so she went by Marie. So, Marie was born to two tenant farmers Jody Lee Nash and... View Obituary & Service Information

The family of Marie Choate created this Life Tributes page to make it easy to share your memories.

Altha Marie Nash was born in Springfield, Tennessee, on September...

Send flowers to the Choate family.