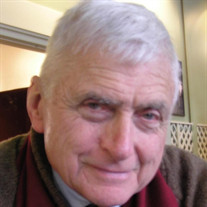 Livingfield More, 94, left this world January 19, 2021 having lived a full, blessed and productive life persevering through and enduring a lengthy illness. Throughout it all he was disciplined, well-educated, well-read and never pretentious or ostentatious. He was born in July of 1926 to native Nashville parents, E. Livingfield More (1868-1934) http://files.usgwarchives.net/tn/davidson/obits/more01.txt and Ellen Stokes (1895-2001) http://www.findagrave.com/memorial/85729312/ellen-wemyss Livingfield More was a gentleman and a scholar. He believed in being workman-like and was fiercely devoted to his family, both those who came before him and to those whom he leaves behind. Ancestors of whom he was particularly proud included his father, who was a successful lumberman and businessman in Alabama and participated in the organization of the Centennial Celebration for the State of Tennessee which subsequently became Centennial Park. His great grandfather, Josiah Nichol, former mayor of Nashville and owner of Belair Mansion, was instrumental in the purchase of the land upon which the state capital was built. His maternal grandfather, Walter Stokes Sr., who was a prominent lawyer served as president of the Nashville Bar association. Young Livingfield More was born in Nashville but spent the first 8 years of his life in River Falls, Alabama, where his father owned and operated the Horseshoe Lumber Company, was partner in other businesses and built two dams to provide electricity to the area. When his father fell ill, their small family returned to Nashville where he attended Ransom School, Stokes School, Wallace University School, McCallie School, Vanderbilt University and Vanderbilt Law School from which he graduated in 1952 and passed the Bar Exam shortly thereafter. He was proud to be presented to the Supreme Court of Tennessee in 1953 and even prouder to find that his law degree was converted to a JD several decades later. Having started Vanderbilt when he was 16, his college experience was interrupted when he became 18 and decided to join the Army to fight in WWII. After discharge from the army, he spent a season working on an estate outside of London with the option of fox hunting a couple of days each week as part of his remuneration. He was a devoted horseman and animal husbandman in general. The years he spent in law school were in honor of his maternal grandfather Walter Stokes, but from his mid-twenties on, he was at heart a farmer. He met the love of his life, Agnes Stokes Fort of Nashville, in 1952 and they married in 1957. They had a daughter and two grandchildren. They devoted their lives to each other and their families, River Grange farm and the Arcade in downtown Nashville, reading to each other after dinner and occasionally traveling... often biking across the UK, until she was tragically taken from him in 2011. He was a member of the Society of the Cincinnati, the Phi Delta Theta fraternity at Vanderbilt University, the Belle Meade Country Club and the Williamson County Co-Op. He took part in the founding of Harpeth Academy in Franklin, TN which eventually became part of BGA. He also was a founding member and continued to be a staunch supporter of St. Dunstan’s Anglican Church, now Holy Cross Anglican Church. He is survived by his daughter, Ellen Livingfield More, and two grandchildren, Stokes Dunavan and Nicholson Dunavan. The family wishes to thank his many support systems including but not limited to Lisa Graham and Carol Patterson, the loyal caregivers who would “see him out” in his words. Private services will be held at a later date. If so moved, please make donations in his memory to Holy Cross Anglican Church (4119 Murfreesboro Road Franklin TN 37067), the Red Cross (2201 Charlotte Ave, Nashville, TN 37203, Attn: Leigh Elliot), the Covington County Historical Society (P.O. Box 1582 Andalusia, Alabama 36420) or to the charity of your choice.

Livingfield More, 94, left this world January 19, 2021 having lived a full, blessed and productive life persevering through and enduring a lengthy illness. Throughout it all he was disciplined, well-educated, well-read and never pretentious... View Obituary & Service Information

The family of Livingfield More created this Life Tributes page to make it easy to share your memories.

Send flowers to the More family.