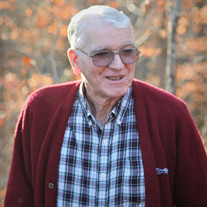 Age 86 of White House went home to be with the Lord Saturday, September 18, 2021 at his home. He was born May 17, 1935 in Hardin, KY to Charlie Simmons Jackson & Mary Mavis Elkins Jackson. He worked as a skilled carpenter before his retirement.... View Obituary & Service Information

The family of Lawrence Dale Jackson created this Life Tributes page to make it easy to share your memories.

Age 86 of White House went home to be with the Lord Saturday,...

Send flowers to the Jackson family.