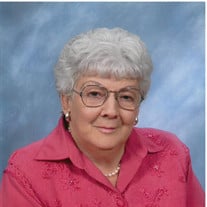 On Friday, October 29, 2021, Kathryn Planzer Goodman of Adams, TN passed away at the age of 99. Kay was born on January 15, 1922 in Chattanooga, TN to the late Beulah Dixon Planzer and the late John Planzer. Kay graduated from Central High School in Chattanooga, TN in 1940. She attended the Chattanooga Business School for 2 years. Kay met her late husband, Fred Goodman while he was serving in the U.S. Calvary (Army) when she was 15 years old. Shortly after her high school graduation, they were married when she was 18 years old. They were married for over 60 years. Fred retired from the Air Force after 27 years of a military career as a Lieutenant Colonel. Kay and Fred moved 28 times in the first 28 years of their married life. They lived in: Ft. Oglethorpe, GA; Atlanta, GA; Camp Blanding, FL; Camp Murphy, FL; Chattanooga, TN; Boca Raton, FL; Westover Field, Mass; Warner Robins, GA; Mobile, AL; Frankfurt, Germany; San Antonio, TX; Seneca Lake, NY; Glendale, AZ; Phoenix, AZ; Wichita Falls, TX; and the last move to Adams, TN in 1963. Kay served the Lord faithfully as the church pianist and church clerk for Red River Baptist Church of Adams, TN for over 50 years. She was a member of the Adams Women’s Club and the Robertson County Baptist Association Senior Group. At 91 years of age, Kay moved to Oak Point Assisted Living of Adams, TN where she lived the rest of her life. Kay’s family appreciates the dedication and care she received from the staff and friends at Oak Point. Kay is preceded in death by her: mother, father, husband and sister, Wilma Planzer Crissman. Kay is survived by her daughters, Lisa Fitzgerald (Brad) and Angie Demuth (Robert); nephew and niece, David and Beverly Goodman; niece, Cathy Crissman (Steve); nephews, Ed Crissman and Gene Davidson; and other family members. A special Thank You to Beverly and David Goodman for all the love and special things they did for their Aunt Kay over the years. Graveside services for Mrs. Goodman will be conducted at 11am Monday, November 1, 2021 in the Bellwood Cemetery in Adams, TN with Pastor Bill Bruce and Mr. Tim Henson officiating. In lieu of flowers memorial contributions may be made to the Fisherman’s Charity of Adams, TN. Austin & Bell Funeral Home in Springfield is in charge of these arrangements. AUSTIN & BELL FUNERAL HOME- 509 WALNUT STREET, SPRINGFIELD, TN (615) 384-1000

On Friday, October 29, 2021, Kathryn Planzer Goodman of Adams, TN passed away at the age of 99. Kay was born on January 15, 1922 in Chattanooga, TN to the late Beulah Dixon Planzer and the late John Planzer. Kay graduated from Central High... View Obituary & Service Information

The family of Kathryn Ann Planzer Goodman created this Life Tributes page to make it easy to share your memories.

Send flowers to the Goodman family.