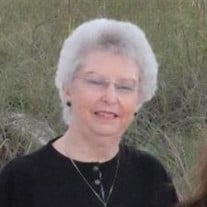 Joyce Blankenship Hollingsworth, age 84, of Springfield, passed away Monday, February 8, 2021 at NorthCrest Medical Center. Funeral services will be held Friday, February 12, 2021 at 12pm in the chapel of the Austin & Bell Funeral Home in Springfield with Brother David Evans and Martin Babb officiating. Burial will follow in the Elmwood Cemetery with Michael Hollingsworth, Justin Hollingsworth, Chris Hollingsworth, Blake Hollingsworth, Gavin Hollingsworth, Jack Hollingsworth, Jerry Dozier and Andy Mason serving as pallbearers. Visitation will be held at the funeral home on Friday from 9am until the hour of service at 12 noon. The family respectfully asks that anyone attending the visitation or service please wear a face mask. Joyce was born February 24, 1936 in Nashville to the late Frances W. and Mildred Bellamy Blankenship. She met Ralph, the love of her life, in high school following a school program. Ralph says he mustered enough courage to go up and speak to her and ask if he could call her. The rest is history as they say and she and Ralph spent almost 70 years together. She is known to all who loved her as "Grammy". Joyce and Ralph travelled all over the country square dancing with the Springfield Squares. She loved playing Bridge, any kind of card game, Dominos, and listening to the Bill Gaither Trio. Whether at their lake house or at home, she loved sitting in her swing and watching her hummingbirds and flowers. Every morning began the same way … with a Coca Cola and a straw. Joyce was the co-owner of Car and Home Supply, Co. and was a member of Springfield Baptist Church where she cared for the children in the nursery for over 40 years. Despite her illness the past few years, she NEVER complained no matter how she was feeling. Her first concern was always her family members and friends, not herself. According to her family, Joyce had an incredible memory. If she spent any time at all with you – she remembered your family and children’s names, birth dates, anniversaries etc. Known for her potato salad and lemon ice box pies as well as many other dishes, Joyce said what she meant and meant what she said. Joyce is survived by her husband of 66 years, Ralph Hollingsworth; sons and daughters-in-law, Michael Lee and Betsy Hollingsworth and Glenn Mark and Debbie Hollingsworth, all of Springfield; grandchildren and spouses, Michael and Michelle Hollingsworth, Chris and Jessica Hollingsworth, Victoria Hollingsworth, Justin and Laura Hollingsworth, Blake and Kimberly Hollingsworth and Laura Kay and Allan Crawford. Mrs. Hollingsworth is also survived by 13 great-grandchildren. If so desired memorial contributions may be made to the Robertson County Animal Shelter. Any donations may be sent in c/o Austin & Bell. Austin & Bell Funeral Home in Springfield is in charge of these arrangements. AUSTIN & BELL FUNERAL HOME- 509 WALNUT STREET, SPRINGFIELD, TN (615) 384-1000

The family of Joyce Hollingsworth created this Life Tributes page to make it easy to share your memories.

Send flowers to the Hollingsworth family.