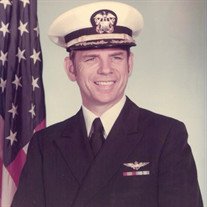 Mr. John Gordon Greer, age 90, of Brentwood, died at his home Saturday, October 9, 2021 watching Vanderbilt football on television. A graveside memorial service will be held Friday, October 22, 2021 at 1pm in the Dickson Union Cemetery. The son of John Oscar Greer and Linnie Clair Haley Greer, John was born in Detroit, MI in 1931; at the age of 15 he moved to Dickson, TN with his family. Known as “Flash Gordon” on the football field, John earned a football scholarship to Castle Heights Military Academy. An injury led him to enroll the following year at Vanderbilt University where he joined the Naval ROTC and Kappa Sigma fraternity (serving as Treasurer) and lettering in track, before graduating in 1954. John went into the Naval Flight Training Program in Pensacola, FL before becoming a flight instructor at Whiting Field until 1957 when he joined the Naval Reserves. John joined Guaranty Mortgage Company in Nashville in 1957, attended the School of Mortgage Banking at Northwestern University and served as President of Mortgage Bankers Association of Nashville. From the mortgage banking business, John went into commercial appraisal, opening John G. Greer and Associates. He was a member of the American Institute of Real Estate Appraisers and served as President of its Middle Tennessee chapter. John loved flying with the Naval Air Reserves as a fighter pilot, flying the A4 Skyhawk, proudly retiring in 1984 having reached the rank of Captain. He also loved golf, joining Brentwood Country Club in 1962 and at his death was their oldest member. The following words from The Waiting Tower September 13, 1957 newspaper held true to his death: “Whenever he wasn’t instructing or doing some of the other many jobs he undertook, Mr. Greer could usually be found on the golf course.” In addition to his wife, Audrey, Captain Greer is survived by sons, John Greer (Kelly) and David Greer; grandchildren, Chandler Wannenburg (Robbie), Jackson, Rainier and Noah Greer; great-grandchildren, Ryker and Raelyn; his sister, Barbara Perkins Adams (Buddy); nephews Jay Perkins and Chris Perkins (Maureen) and four great-nephews and one great-niece. In lieu of flowers, memorial contributions may be made to the Tennessee Golf Foundation, whose mission is “to promote golf and its life-enhancing values, with an emphasis on teaching youth and the disadvantaged,” at 400 Franklin Road, Franklin, TN 37069 or tngolf.org. Austin & Bell Funeral Home in Springfield is in charge of these arrangements. AUSTIN & BELL FUNERAL HOME- 509 WALNUT STREET, SPRINGFIELD, TN (615) 384-1000

The family of John Greer created this Life Tributes page to make it easy to share your memories.

Send flowers to the Greer family.