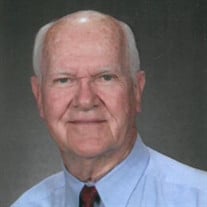 John Lafayette Evilcizer, age 82, of Greenbrier, passed away Monday, January 18, 2021 at NorthCrest Medical Center in Springfield. Funeral services will be held Thursday, January 21, 2021 at 2pm in the chapel of the Austin & Bell Funeral Home in Greenbrier with Brother Chad Phelan and Brother Jon Fuqua officiating. Burial will follow in the Springfield Memorial Gardens with family and friends serving as pallbearers. Visitation will be held at the funeral home on Thursday from 12pm until the hour of service at 2pm. Mr. Evilcizer was born January 2, 1939 in Springfield to the late John William and Mattie Ellis Evilcizer. He worked at DuPont in the Maintenance Department, was a veteran of the U.S. Army and was a member of the Ebenezer Baptist Church. He served his community for 25 years as a member of the Greenbrier planning and zoning committee. Mr. Evilcizer loved his family but especially his granddaughters. In addition to his parents Mr. Evilcizer is preceded in death by his brother, William Gary Evilcizer, sisters, Sue Anne Harris and Betty Lynn James, and his nephew, John Harris. Mr. Evilcizer is survived by his wife of 54 years, Billie Suter Evilcizer; son, Todd (Tammy) Evilcizer of Springfield; brother, Larry (Patty) Evilcizer of Springfield; brother-in-law, Jimmy (Bobbye) Wilson of Greenbrier; sister-in-law, Betty Davis of Cookville; grandchildren, Brenna Reeves, Kendall Evilcizer and Camryn Evilcizer; and great-grandchildren, Charlie Reeves and Bonnie Reeves. If so desired memorial contributions may be made to the Ebenezer Baptist Church Building Fund. Any donations may be sent in c/o Austin & Bell. Austin & Bell Funeral Home in Springfield is in charge of these arrangements. AUSTIN & BELL FUNERAL HOME- 2619 HWY 41S, GREENBRIER, TN 37073 (615) 643-4000

The family of John Evilcizer created this Life Tributes page to make it easy to share your memories.

Send flowers to the Evilcizer family.