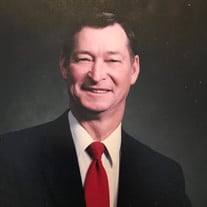 John I. Bourne, Jr., age 85, of Adams, passed away Sunday, February 14, 2021 at NorthCrest Medical Center in Springfield. Funeral services will be held Saturday, February 20, 2021 at 1pm in the chapel of the Austin & Bell Funeral Home in Springfield with Brother Issac Bourne and Brother Tyler Estep officiating. Burial will follow in the Bellwood Cemetery with Daniel Sholar, Neil Bourne, Paul Sholar, Kyle Greene, Vince Shepard, Donald Hobgood, Matt Greene, John Gillian and Timmy Head serving as pallbearers. Honorary pallbearers will be nieces & nephews, and honorary kids & honorary grandkids. Visitation will be held at the funeral home on Friday, February 19, 2021 from 2-6pm and again on Saturday from 11am until the hour of service at 1pm. Mr. Bourne was born March 3, 1935 in Adams, TN to the late John and Lois McNeil Bourne, Sr. He was a farmer and member of the Center Point Baptist Church where he was the Music Director for many years. Before attending Center Point Baptist Church he was a Deacon and Music Director at Tiny Town Baptist Church for several years. He served as Robertson County Commissioner, Director of the Farm Credit Board, Board member and President of Planters Grain and Board member of Elmhurst Nursing Home. Mr. Bourne loved to sing and was a member of the The Messengers Quartet for 15 years and was a member of the Woodard Brothers Quartet for 10 years. In addition to his parents, Mr. Bourne is preceded in death by his wife of 22 years, Ruth Smith Bourne; sisters, Margaret Downing and Jean Poor; brothers, Donald Bourne, Wayne Bourne and Buford Bourne; son-in-law, Vernon Woodard; and granddaughter, Candice Carter. Mr. Bourne is survived by his son and daughter-in-law, John “Buddy” and Gayle Bourne of Cedar Hill; daughters and sons-in-law, Diane and Jeff Shepard of Adams, Susie and Keith Sholar of Adams and Elaine Woodard of Springfield; 15 grandchildren; and 25 great-grandchildren. If so desired memorial contributions may be made to the Adams Fishermen’s Club. Any donations may be sent in c/o Austin & Bell.

John I. Bourne, Jr., age 85, of Adams, passed away Sunday, February 14, 2021 at NorthCrest Medical Center in Springfield. Funeral services will be held Saturday, February 20, 2021 at 1pm in the chapel of the Austin & Bell Funeral Home in Springfield... View Obituary & Service Information

The family of John I. Bourne Jr. created this Life Tributes page to make it easy to share your memories.

Send flowers to the Bourne family.