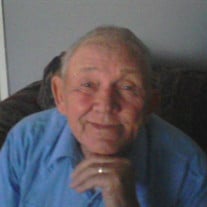 Jimmy Morris Rippy, Sr., age 78, of Guthrie, KY and formerly of Robertson County, passed away Friday, April 13, 2018 at his home. Funeral services will be held Monday, April 16, 2018 at 1pm in the chapel of the Austin & Bell Funeral Home in... View Obituary & Service Information

The family of Jimmy Rippy, Sr. created this Life Tributes page to make it easy to share your memories.