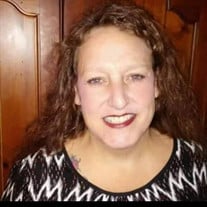 Age 53 of Franklin, KY passed away Sunday, August 9, 2020 at her home. She was born February 12, 1967 in Nashville, TN to Donald & Vivian Denson Spalding. She worked in food service until becoming disabled. She is preceded in death by her... View Obituary & Service Information

The family of Jill Renee Allen created this Life Tributes page to make it easy to share your memories.

Send flowers to the Allen family.