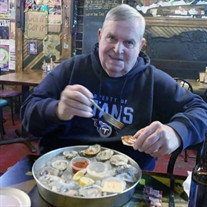 Age 70 of White House passed away Wednesday, April 21, 2021 at St. Thomas Midtown. He was born July 29, 1950 in Nashville, TN to Lloyd L. and Faye P Whitley. He worked in Quality Control/Dispatching for Ideal Concrete until his retirement.... View Obituary & Service Information

The family of Jerry Lloyd Whitley created this Life Tributes page to make it easy to share your memories.

Send flowers to the Whitley family.