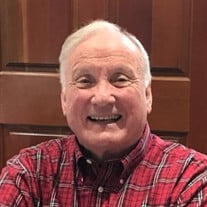 Dr. Jerry Don Oakley, age 81 of Gallatin, TN went home to be with the Lord Saturday, January 23, 2021 at NHC in Hendersonville. He was born December 10, 1939 in Marshall County, KY to Edward and Vivian Byers Oakley. Dr. Oakley graduated from Wingo High School in Wingo, KY. He was married to Brenda Jean Hall on September 7, 1960. Jerry was an avid Kentucky basketball fan, and he was extremely honored and proud to be selected to the All-State Kentucky basketball team in 1957. He received a Bachelor of Science degree from Union University in Jackson, TN. He also received the Master of Divinity and Doctor of Ministry degrees from the Southern Baptist Theological Seminary in Louisville, KY. Dr. Oakley pastored or served on the staff of churches in Kentucky and Tennessee for thirty-four years. Included in these churches were Hickory Valley Baptist Church, Hickory Valley, TN, Beechmont Baptist Church, Louisville, KY (Asst. Pastor), Youngers Creek Baptist Church, Elizabethtown, KY, Magnolia Baptist Church, Magnolia, KY, Yellow Creek Baptist Church, Owensboro, KY, Columbia Baptist Church, Columbia, KY, Springfield Baptist Church, Springfield, TN. Dr. Oakley pastored at Springfield Baptist Church for 17 years. He was the Executive Director of Warren Association of Baptists in Bowling Green, KY for 13-1/2 years. Dr. Oakley was Moderator for three associations: Daviess-McLean Association in Owensboro, KY, Russell Creek Association in Columbia, KY and Robertson County Association in Springfield, TN. He served thirteen years on the Tennessee Baptist Convention Executive Board. While serving on this Board, he was Chairman of the Budget Committee and Chairman of the Executive Committee. Dr, Oakley served for thirteen years on the Kentucky Baptist Convention Mission Board. While serving on this board, he was Chairman of the Education Committee. He was also a member of the Administrative Committee. Dr. Oakley has been president of the Kentucky Baptist Pastor’s Conference, the Tennessee Baptist Pastor’s Conference, The Tennessee Baptist Convention Executive Board and the Tennessee Baptist Convention. He also served as a Volunteer Missionary to Venezuela twice for the Southern Baptist International Mission Board. Dr. Oakley served as a member and Chairman of the Kentucky Baptist Convention Constitution and By-Laws Committee. He was also a member of the Baptist Faith and Message Committee for the Kentucky Baptist Convention. In 2007, he was elected Director of Missions of the year in the Kentucky Baptist Convention. Dr. Oakley has written and had published several articles in the Proclaim Magazine and the Church Administration Magazine. He wrote the Sunday School lessons for the Robertson County Times in Springfield, TN from 1983 to 1994. During his service, Dr. Oakley has received a number of awards. He was made a Kentucky Colonel in 1973 by Gov. Wendell Ford. He received the award of Aide-de-Camp of the Governor’s Staff of Tennessee from Gov. Ned Ray McWhorter in 1987. Dr. Oakley received the Key to the City of Nashville, Tennessee from Mayor Bill Boner in 1987. He received The Key to the City of Springfield, Tennessee from Mayor Billy Carneal in 1993. He was selected the Baccalaureate Speaker for Union University, his Alma Mater, in 1987. Dr. Oakley has served as Executive Director of Warren Association since 1994. Under his leadership, a new Administrative building, the L.E. Smith Baptist Center, was completed in 1998. A recreational complex has been developed and is still expanding on the 29 acre campus. A Hispanic Mission was established and sponsored by Warren Association of Baptists in 2002 until the present. A church building was built for the Hispanic Mission by Warren Association of Baptists in 2006. Dr. Oakley retired December 31, 2007. In preparation for serving as a Transitional Pastor after retirement, Dr. Oakley completed the training course “Transitional Pastor Ministry” sponsored by Lifeway Christian Resources, Nashville, Tennessee. Dr. Oakley has served as a Transitional Pastor of several churches. There have been some that he has served on more than one occasion. He is preceded in death by his parents, Edward and Vivian Byers Oakley; grandson, Kyle Bagwell. He is survived by his loving wife of 60 years, Brenda J. Oakley, Gallatin, TN; daughters, Valerie (Dr. John) Cloud, Little Rock, AR and DeAna (Scott) Bagwell, Goodlettsville, TN; sister, Cheryl Oakley, Wingo, KY; three grandchildren. Lauren (Dr. Micah) Wiegel, Katherine (Drew) Tappan and Kristin (Justin) Muller; four great- grandchildren, Annaleigh Wiegel, Evie Wiegel, Philip Andrew Tappan III, and Grayson Scott Lewis Crump. Funeral service is scheduled for Tuesday, January 26, 2021 at 11:30am in Springfield Baptist Church with Rev. Steve Ayers and Rev. Travis Fleming officiating. Interment will follow in Springfield Memorial Gardens with Vince Bagwell, Chris Bagwell, Donnie Hogan, Dick Moore, Alan Fowler and Lee Smith serving as pallbearers. Honorary pallbearer will be Ron DeBerry and Keith Bagwell. Visitation is planned for Tuesday, January 26, 2021 10am until the hour of service at the church. Memorial contributions may be made to Mission Projects at Springfield Baptist Church or Gallatin First Baptist Church. All donations may be sent care of the Austin & Bell Funeral Home. The family will be honoring all Covid protection protocols and anyone who cannot make the service is invited to watch the service via livestream through Springfield Baptist Church website. Springfield-Baptist.com then click on Livestream. ARRANGEMENTS ENTRUSTED TO AUSTIN & BELL 509 Walnut Street Springfield, TN 37172 (615)384-1000 www.austinandbell.com

Dr. Jerry Don Oakley, age 81 of Gallatin, TN went home to be with the Lord Saturday, January 23, 2021 at NHC in Hendersonville. He was born December 10, 1939 in Marshall County, KY to Edward and Vivian Byers Oakley. Dr. Oakley graduated from... View Obituary & Service Information

The family of Dr. Jerry Don Oakley created this Life Tributes page to make it easy to share your memories.

Send flowers to the Oakley family.