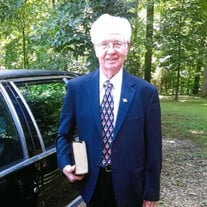 Jerry Alfred McClain, age 84, of Springfield, passed away Tuesday, December 13, 2016 at his home. Funeral services will be held Friday, December 16, 2016 at 11am in the chapel of the Austin & Bell Funeral Home in Springfield with Brother Jim Woodard and Dr. Robert Tyson officiating. Burial will follow in the Hopewell Cemetery with Jack McClain, Corey Pauze’, James Haley, Edward Hunter, Lee Pendleton and John Hurt serving as pallbearers. Honorary pallbearers are The Adult Men’s Sunday School Class of Hopewell Baptist Church. Visitation will be held at the funeral home on Thursday, December 15, 2016 from 2-8pm and again on Friday from 9am until the hour of service at 11am. Mr. McClain was born February 23, 1932 in Ft. Smith, AR to the late Hubert E. and Ila Hall McClain. When he was 14 years old he and his mother were baptized into Christ by his mother’s brother, Ertle Hall, who was minister of the First Christian Church in Stilwell, OK. He served in the U.S. Navy from 1951 until 1955 where he was stationed in Sasabo, Japan during the Korean Conflict and worked in Naval Intelligence. He received degrees from Ventura College, San Jose State University and the University of Southern California. Mr. McClain was a man who knew how to love well. He was a friend to all and greeted everyone with a warm handshake or hug along with his big, beautiful “Jerry McClain” smile. Everyone loved his smile! He served his Lord by serving others, helping folks in their time of need, or witnessing to people in hopes of winning them to Jesus Christ, his Lord and Savior. Jerry loved his family and friends. He was active in many Disaster Relief efforts – including serving in New York following 9/11. His lifelong dream was to live in a log home in the country and it was there that he and his wife enjoyed their “family” of dogs, cats, deer, turkey and any living creature that needed a home. Mr. McClain did volunteer work with the Robertson County Chapter of Habitat for Humanity where he served as President for many years. He served as the Baptist Men’s Director for the Robertson County Baptist Association for 16 years, he was a volunteer with the American Red Cross Disaster Relief Program and the Robertson County Baptist Association Disaster Relief Program. He was a member of Hopewell Baptist Church for the past 22 years where he taught the Adult Men’s Sunday School Class for more than 18 of those years. Prior to beginning his career with the state of TN Jerry served as a Child Welfare Counselor in Ventura County, CA, he was a Probation Officer in Los Angeles, CA, a Parole Officer in Santa Monica, CA and Regional Director for AARP and the National Retired Teachers Association in Atlanta, GA. He also served as Director of Senior Citizens Services in Memphis, TN. Mr. McClain’s work with the State of TN included; from 1963-1967, he was appointed to serve as the first Executive Director of the Commission on Aging by Governor Frank Clement; from 1968-1969, he served as Field Representative for the Governor’s Committee on Employment for the Handicapped; from 1970-1979 he served with the Department of Corrections as District Director of Probation and Parole and Educational Consultant/Director of Volunteer Services; from 1980-1990, he served with the Board of Parole as regional Director of Parole, State Director of Parole and Executive Assistant to the Chairman of the Board of Parole. After retirement from the State of TN Jerry worked in a part-time capacity at the Austin & Bell Funeral Home in Springfield where he enjoyed greeting and comforting people in their time of need. In addition to his parents Mr. McClain is preceded in death by his brother, Jack McClain. He is survived by his wife of 28 years, Janet Hunter McClain; daughter, Robin (James) Haley; son, Jack Richard McClain; granddaughter, Kayla Pauze’ and grandson, Corey Pauze’; and great-granddaughter, Ila Grace. Mr. McClain is also survived by the mother of his children, Betty McClain of Cottontown and his large extended family. The family requests memorial contributions be made to Gideon’s International or to the Robertson County Baptist Association Disaster Relief Fund. Any donations may be sent in c/o Austin & Bell. Austin & Bell Funeral Home in Springfield is in charge of these arrangements. AUSTIN & BELL FUNERAL HOME- 509 WALNUT STREET, SPRINGFIELD, TN (615) 384-1000

Jerry Alfred McClain, age 84, of Springfield, passed away Tuesday, December 13, 2016 at his home. Funeral services will be held Friday, December 16, 2016 at 11am in the chapel of the Austin & Bell Funeral Home in Springfield with Brother Jim... View Obituary & Service Information

The family of Jerry McClain created this Life Tributes page to make it easy to share your memories.

Send flowers to the McClain family.