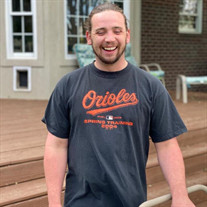 Age 27 of Cottontown passed away Monday, November 1, 2021 in Franklin, KY. He was born February 5, 1994 in Nashville, TN to James Peter & Kimberly Etchebarren Leggett. Jeremy was a 2012 graduate of Station Camp High School and was employed... View Obituary & Service Information

The family of Jeremy James Leggett created this Life Tributes page to make it easy to share your memories.

Send flowers to the Leggett family.