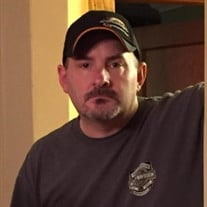 Jason Allen Dietsch, age 45 of Old Hickory, Tennessee, died Thursday, February 18, 2021 at his home. Funeral services will be conducted at Austin & Bell Funeral Home in Pleasant View at 1:00PM on Wednesday, February 24th, with Elder Terry Hall officiating. Jason’s remains will be cremated following the service. The family will receive friends at the funeral home on Tuesday, February 23rd from 4-7PM and again on Wednesday from 11:00AM until the hour of service at 1:00PM. Jason was born on September 25, 1975 in Omaha, Nebraska to Debbie Fields Silva and the late Rick Dietsch. He was a mechanic for Emergency Vehicle Services in Nashville and a veteran of the United States Army. He also received the Purple Heart award. He was a great mechanic, funny, loving and enjoyed four wheeling. He loved to cook, camping and most of all, to help people. In addition to his father, he is preceded in death by his father-in-law, Roy Dwight Spivey. In addition to his mother, he is survived by his wife, Jennifer Dietsch; son, Kolton Dietsch; stepmother, Susan Dietsch; brothers, Eric (Jennie) Dietsch, Danny Dietsch, Quenten Vanderford; sister, Mandy Vanderford; loving aunts and uncles: and mother-in-law in Patricia Spivey. If so desired, memorial contributions may be made to Cheatham County Veterans Memorial, P.O. Box 52, Ashland City, Tn. 37015 AUSTIN & BELL FUNERAL HOME in Pleasant View is in charge of these arrangements. 6316 Highway 41A, Pleasant View, Tennessee 37146 (615) 746-4433 www.austinandbell.com

The family of Jason Dietsch created this Life Tributes page to make it easy to share your memories.

Send flowers to the Dietsch family.