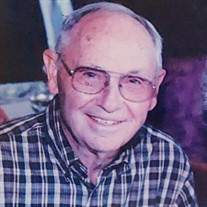 James “Jim” Willhite, age 87 of Springfield, TN passed away Friday, May 7, 2021. A time of worship to God and celebration of his life will be at 10am, Wednesday, May 12th at Main Street Church of Christ in Springfield, TN with Edwin Willhite, Don Jenkins, Joe Rushing, Barry Throneberry and Daniel Rushing officiating. Burial will follow in Pleasant Valley Cemetery in Hurricane Mills, TN with Doyle Watson, John Watson, Philip Watson, Andy Willhite, Roger Youree, Glenn Hollandsworth, George Hilliard, Will Gaines and David Willhite serving as pallbearers. Honorary pallbearers are the Main Street Church of Christ Elders, Don Jenkins, Jim Gray, Rick Ballard and Mike McMurray. The family will receive friends 4pm to 8pm on Tuesday, May 11th and 9am until the time of service on Wednesday at the church, 318 N. Main St. Jim and his twin brother Joe were born June 23, 1933 in Hurricane Mills to the late Bell and Ollie Page Willhite. He was also preceded in death by his wife, Sara 'Ruth" Youree Willhite; sister, Ollie Bell Watson and brother, Dennis Willhite. Jim was baptized into Christ as a teenager was an involved wherever he lived. In 1962, Jim and Ruth moved to Springfield where he served as a deacon for at least 15 years and a shepherd for 30 years with the Main Street Church of Christ. Jim had a BS Degree in Animal Science and a Master’s Degree in Animal Husbandry from the University of Tennessee. He met Ruth while doing 4-H Extension work in Maury County and married in Rutherford County. Jim was stationed at San Diego and the South Pacific while serving in the Navy. In 1962, the Willhites moved to Springfield and Jim became the 4-H Agent with the Agriculture Extension Office. His humility and gregarious personality, endeared him to Robertson County parents and their children. As students they learned leadership, work ethic, public speaking skills that brought them success at all levels of competition and life. When Mr. Willhite retired from 4-H, Commerce Union approached him about becoming a banker. His farming knowledge and people skills brought him success. He rode out the various banking mergers after Commerce Union was sold, eventually retiring with Bank of America. During the banking years Jim served as President of the Springfield of Rotary Club. He served a term as President of the Robertson County Chamber of Commerce. He served on a number of boards including Springfield Housing Authority, Industrial Development, Draughon Foundation, Library Board, Freed Hardeman University Advisory, and Churches of Christ Disaster Relief. As a master woodworker, every baby, graduate, or marriage connected with the church for the last 35 years was acknowledged with the gift of a handmade stool, bookend, tray, and clock. Children, grandchildren, and friends have treasured beds, desks, grandfather clocks, Jackson Presses, and serving trays made in his Pleasant Hill Drive workshop. As a leader, Jim was able to rally Christians from a number of states to help brethren in Mexico and Africa build houses of worship. Over 180 brethren from Springfield participated in at least one of thirty trips he helped plan and worked on himself. In his late 70’s, Jim was up on a scaffold laying block for eight hours in the hot sun. A lover of the outdoors, Jim made time to meet his brother Joe to fish on the Tennessee River. Inviting visitors from church over for fish fries was he and Ruth’s favorite way of showing hospitality. Mentor is the word many of the Main Street elders, deacons, and ministers use to describe Jim Willhites’ lasting legacy on their lives. Mr. Willhite is survived by son, Edwin (Barbara) Willhite of Murfreesboro, TN; daughter, Adelia (Andy) Gaines of Coldwater, MS; twin-brother, Joe (Shirley) Willhite of Martin, TN; grandchildren, David (Kristina) Willhite, Andrea (Glenn) Hollingsworth, Paige Willhite, Rachel (George) Hilliard, Mary Kate Gaines, Will Gaines and great-grandchild, Barrett Hollingsworth. In lieu of flowers, contributions may be made to the Main Street Church of Christ Building Fund or the Church of Christ Disaster Relief Fund or Pleasant Valley Cemetery. Mr. Willhite's service will be live streamed on mainstreetcoc.org. Austin & Bell Funeral Home in Springfield is in charge of these arrangements. AUSTIN & BELL FUNERAL HOME, 509 WALNUT STREET, SPRINGFIELD, TN 37172 (615) 384-1000

James &#8220;Jim&#8221; Willhite, age 87 of Springfield, TN passed away Friday, May 7, 2021. A time of worship to God and celebration of his life will be at 10am, Wednesday, May 12th at Main Street Church of Christ in Springfield, TN with Edwin... View Obituary & Service Information

The family of James Willhite created this Life Tributes page to make it easy to share your memories.

Send flowers to the Willhite family.