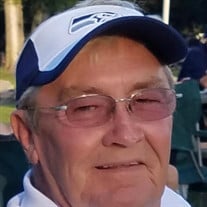 Harold Benjamin Corlew “Dixie”, age 78 of Pleasant View, Tennessee, died Thursday, December 2, 2021 at The Residence of Alive Hospice in Nashville. Funeral services will be held at 2:00PM on Monday, December 6th, at Austin & Bell Funeral Home in Pleasant View with Bro. Gene Parton officiating. Burial will follow in Mallory’s Cemetery in Chapmansboro with Chad Corlew, Santiago Cirilo, Cade Corlew, Ricky Knox, John Carr, Dale Shearon,and Phil Welker serving as pallbearers. The family will receive friends at the funeral home on Monday from 10:00AM until the hour of service at 2:00PM. Mr. Corlew was born on August 19, 1943 in Clarksville, Tennessee to the late Harry & Gladys Shepard Corlew. He started a career at State Industries and then a supervisor at KFC manufacturing. He worked several years at East Montgomery Utilities where he retired. He was a veteran of the U.S. Army serving during the Vietnam war. In his younger years he enjoyed bird hunting, square dancing, drag racing, and tobacco farming. He also played softball in the military. Mr. Corlew spent time playing golf and fishing and he loved to watch western movies. He never met a stranger and loved his family, most especially his grandchildren. He was of the Baptist Faith. In addition to his parents, he is preceded in death by his sister, Ronnie Adkins. He is survived by his wife of 53 years, Patsy Knox Corlew; son, Chad Corlew; daughter, Misty Corlew-Cirilo (Santiago); and grandchildren, Cade Corlew, Jaycee Corlew, and Haven Cirilo. If so desired, memorial contributions may be made to St. Jude Children’s Research Hospital, 501 St. Jude Pl., Memphis, TN 38102-9959. AUSTIN & BELL FUNERAL HOME in Pleasant View is in charge of these arrangements. 6316 Highway 41A, Pleasant View, Tennessee 37146 (615) 746-4433 www.austinandbell.com

The family of Harold Corlew created this Life Tributes page to make it easy to share your memories.

Send flowers to the Corlew family.