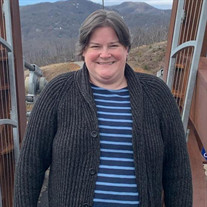 Age 42 of White House passed away Saturday, June 5, 2021 at her home. She was born January 30, 1979 in Bellflower, CA to Michael & Marian Williams George. She married Ryan Caywood on December 3, 2000 and they had four beautiful children together, Rebecca, Allison, Zachary and Matthew. Elizabeth was working her way toward becoming a Registered Nurse just before they moved the kids to White House, TN in 2016, with dreams of a better future. She found a job in a hospital with hopes of that being her "foot in the door" for her nursing career. As 2017 began, she was struck with an awful, terminal disease called Idiopathic Pulmonary Arterial Hypertension. She made the tough decision to give up her dream of becoming an RN, due to the physical strain it would put on her. She wanted to spend every minute of time she could with her kids. She then found a wonderful job at Skyline Emergency Department as a Unit Secretary and she loved the "family" she worked with. In August 2019, as Elizabeth was looking at the end of her life, she got the gift of more time when she received a double lung transplant. It was an extremely difficult road for her to recover, but she did and she was able to have more time with her kids. Unfortunately, 16 months after her transplant, she developed chronic lung rejection that eventually led to her passing. Elizabeth loved to bake, quilt, work on DIY projects, craft things, and she had an adventurous side to her. Before her diagnosis she had been skydiving twice! But most of, she loved spending time with her kids. She is preceded in death by her father, Michael George. She is survived by her loving husband of 21 years, Ryan Caywood; their children Rebecca, Allison, Zachary and Matthew, all of White House, TN; mother, Marian George, Carritos, CA; sister, Kim (Robbie) Caywood, Long Beach, CA; "Soul Sister", Nicole Best, Tustin, CA; extended family and many friends. Graveside service is scheduled for Monday, June 14, 2021 in Hillcrest Cemetery at 11am. There is no visitation planned. In lieu of flowers memorial contributions are encouraged to www.phassociation.org or to www.donatelifetn.org to honor Elizabeth. ARRANGEMENTS ENTRUSTED TO AUSTIN & BELL 533 Highway 76 White House, TN 37188 (615)672-5000 www.austinandbell.com

Age 42 of White House passed away Saturday, June 5, 2021 at her home. She was born January 30, 1979 in Bellflower, CA to Michael & Marian Williams George. She married Ryan Caywood on December 3, 2000 and they had four beautiful children together,... View Obituary & Service Information

The family of Elizabeth Marie Caywood created this Life Tributes page to make it easy to share your memories.

Send flowers to the Caywood family.