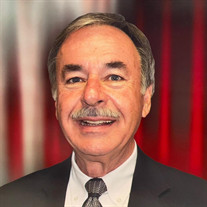 Donald Lee Eden, age 75, of White House, peacefully went home to be with his Lord and Savior surrounded by his loving family on Sunday, January 9, 2022. He was born June 1, 1946 in Springfield, TN to Oscar Lee & Mable Rose Eden. He grew up in the Owens Chapel area and was a 1964 graduate of East Robertson High School. He was a 1967 graduate of Cumberland University with an Associates of Arts degree. He was a 1969 graduate of the University of Tennessee-Knoxville with a Bachelor of Agriculture Science degree and a member of Alpha Gamma Rho Fraternity. He proudly served his country in the U.S. Army 5th Special Forces SPC5 in Viet Nam from May 8 1970-April 8 1971. He was the Founder and President of EUSCO, Inc. from 1972 until his retirement in 2004 and served on the National Truck Equipment Association Board. He was a member of White House First United Methodist Church for 49 years where he served on and chaired numerous committees, taught Sunday School, sang in the choir, was a lay speaker and member of the Laymen’s Club. He also served the United Methodist Church on several district committees. He was a Founding Member of the White House Chamber of Commerce and past President. He was named White House Citizen of the Year in 1994. He was a former board member of the Robertson County Chamber of Commerce and past Chair. He was a Founding Member of the Robertson County Industrial Board and chaired the Robertson County Growth Committee. He was a Farmers Bank Board Member from 1995-2020. He currently served as a Robertson County Commissioner for District 2 for 12 years. As commissioner, he chaired the EMS Committee and Personnel Committee and served on the Solid Waste Committee, Audit Committee and Law Enforcement Committee. He enjoyed officiating weddings in his capacity as County Commissioner. He was also a big supporter of Robertson County Drug Court and Robertson County Schools. He was a member of the Lions Club and Rotary Club. He loved fishing, hunting, farming, working with his hands and tools, the Titans and the Vols but most of all he loved being with his family. Faith, family and service were the epitome of his character. He loved the Lord, loved his family and served his community well. He is preceded in death by his parents; sister, Doye James. He is survived by his loving wife of 50 years, Sherry Eden, White House, TN; son, Donnie (Mandy) Eden, Greenbrier, TN; daughter, Kim (Mark) Reid, White House, TN; brothers, Joe (Mary) Eden, Springfield, TN and Randall (Bobbie) Eden, Cross Plains, TN; 4 grandchildren, Christian Reid, Carson Reid, Abby Eden and Gracie Eden. Funeral service is scheduled for Saturday, January 15, 2022 at 2pm in the Fellowship Hall of White House First United Methodist Church with Rev. Randy Brown officiating. Interment will follow in White House Memorial Gardens with military honors. Visitation with the family will be held Friday, January 14, 2022 4-7PM and Saturday, January 15, 2022 11AM until the hour of the service at First United Methodist Church Fellowship Hall. In lieu of flowers, the family asks that you make a donation in Don’s memory to your favorite charity. The family also requests to please wear a mask during visitation to help keep our mother healthy. ARRANGEMENTS ENTRUSTED TO AUSTIN & BELL 533 Highway 76 White House, TN 37188 (615)672-5000 www.austinandbell.com

Donald Lee Eden, age 75, of White House, peacefully went home to be with his Lord and Savior surrounded by his loving family on Sunday, January 9, 2022. He was born June 1, 1946 in Springfield, TN to Oscar Lee & Mable Rose Eden. He grew up... View Obituary & Service Information

The family of Donald Lee Eden created this Life Tributes page to make it easy to share your memories.

Send flowers to the Eden family.