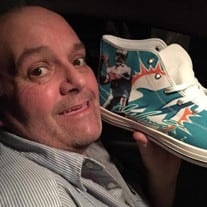 David Bryant Haggard, age 59 of Greenbrier passed away Wednesday, March 31, 2021 in Springfield, TN. A Celebration of Life will be held at 12 pm on Saturday, April 3, 2021 at Austin & Bell Funeral Home Greenbrier. The family will receive friends 4pm to 8pm on Friday, April 2 and 10 am until the time of service on Saturday at the funeral home. Pallbearers will be Dennis (Junior) Haggard, Derek Haggard, Grant Forman, Blake Allen, Colton Smith and James Strong. Honorary pallbearers will be DJ Haggard, Skylar Tackett, Bryson Tackett, Randy Haggard, Dennis Wix and Terry Julian. David was born December 29, 1961 in Nashville, TN to the late Donald Ray Haggard, Sr. and the late Marion Ann Young Haggard. He was also preceded in death by brothers, Dennis Haggard and Donnie Haggard. He was a huge Miami Dolphins fan affectionately known as “Dolfan” and was a loving husband, father and brother to so many people. He always had a smile on his face and a laugh in his heart that he would share with anyone who needed it. He was a machinist at Peterson Tool. He is survived by his wife of 38 years, Jamie Huffman Haggard; his “practice son” Terry (LeeAnn) Julian; children, DJ (Shelby) Haggard, Heather (Skylar) Tackett; grandson, Bryson Tackett; brother, Randy (Jackie) and 3 sisters. He is also survived by countless family members and friends who loved him dearly. “Always Perfect”. In lieu of flowers or donations, please send wishes and prayers for a Miami Dolphins Super Bowl victory! Online condolences may be made at www.austinandbell.com AUSTIN & BELL FUNERAL HOME 2619 Hwy 41 S. Greenbrier, TN 37073 / (615)643-4000

David Bryant Haggard, age 59 of Greenbrier passed away Wednesday, March 31, 2021 in Springfield, TN. A Celebration of Life will be held at 12 pm on Saturday, April 3, 2021 at Austin & Bell Funeral Home Greenbrier. The family will receive friends... View Obituary & Service Information

The family of David Bryant Haggard created this Life Tributes page to make it easy to share your memories.

Send flowers to the Haggard family.