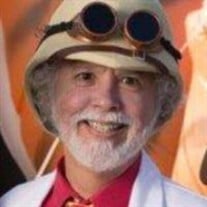 Darrell R. Osborn passed away on December 1, 2021. He was born on July 1, 1959 in Orleans, France, but grew up in Trenton, KY. He was predeceased by his parents, Annie Elizabeth Newcomb Osborn and James Richard Osborn. Survivors include his beloved wife, Stephanie Anne Gannaway Osborn, originally of Cunningham, TN, whom he married on June 18, 1983. Other survivors include his brother James Osborn, brother Will Osborn, sister Carol Ann Osborn Manley, and their families, including many nieces and nephews. Darrell worked as a Senior Graphic Artist and Illustrator for Teledyne Brown Engineering where he was employed for 34 years. He also created imaginative cover art for numerous publishing houses and authors, including his wife. Prior to Teledyne Brown Engineering, Darrell worked at Opryland for 3 years where he worked in Live Entertainment as both a tech and a live performer, often wielding puppets during the various stage shows. He volunteered at the Fantasy Playhouse, Theatre Huntsville, Huntsville Community Chorus, and more, where he designed and built sets for productions and plays, applied special-effects makeup, and often appeared in the shows. He also did special-effects makeup for commercials in Nashville, TN, where at least one won a Clio, the industry equivalent of an Oscar. Darrell was a well-known local celebrity in the U.S. Southeast, where he performed as Doctor Osborn. His magic shows, comedy and “Balloons of Doom” brought smiles to countless children and adults throughout the southeast for decades. He also won awards for magic, comedy, and ventriloquism. Darrell’s contagious humor, boundless creativity and fun-loving attitude will be greatly missed by all who met him. A Memorial Service was held on Tuesday, December 7th at Legacy Chapel Funeral Home and Crematory in Madison, AL. The family will receive friends at Louise United Methodist Church (4861 Louise Road, Cumberland Furnace, TN 37051) on Saturday, December 11th, from 11:00 AM to 1:00 PM. The funeral will be held at 1:00 PM at the church, with burial to follow afterward in the Church cemetery. In lieu of flowers, please make donations to the American Heart Association. Austin & Bell Funeral Home Springfield, 509 Walnut Street, Springfield, TN 37172 is in charge of arrangements.

Darrell R. Osborn passed away on December 1, 2021. He was born on July 1, 1959 in Orleans, France, but grew up in Trenton, KY. He was predeceased by his parents, Annie Elizabeth Newcomb Osborn and James Richard Osborn. Survivors include his... View Obituary & Service Information

The family of Darrell Ray Osborn created this Life Tributes page to make it easy to share your memories.

Send flowers to the Osborn family.