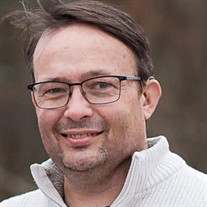 Age 48 of White House went home to be with the Lord Friday, April 9, 2021 at his home. He was born February 23, 1973 in Paris, TN to William & Ronda Peery Michael. He worked as an Inventory Supervisor for Pro Pack and was a member of Goodlettsville... View Obituary & Service Information

The family of Christopher Jared Michael created this Life Tributes page to make it easy to share your memories.

Age 48 of White House went home to be with the Lord Friday, April...

Send flowers to the Michael family.