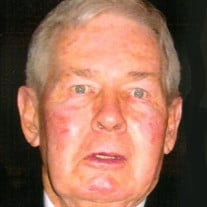 Charles Bennett “C.B.” Grayson, age 80, of Springfield, passed away Wednesday, September 20, 2017 peacefully in his sleep. Visitation will be held from 4:00 to 8:00 PM on Friday, September 22, 2017 at Austin and Bell Funeral Home in Springfield and again on Saturday, September 23rd at Oak Grove Baptist Church in Springfield from 12:00PM until the hour of Service at 2:00PM. Burial will follow the funeral at Greenwood Cemetery in Adairville, Kentucky at 3:00 PM. Dr. Thomas Eden of Oak Grove Baptist Church will be officiating. Mr. Grayson was born in Adairville, Kentucky on February 4, 1937 to the late Edgar and Lois Bennett Grayson. He worked at Bell South for over 30 years. He loved the Lord and his church families at Oak Grove and Whippoorwill Baptist Churches. In addition to his parents Mr. Grayson is preceded in death by his granddaughter, Sarah Murphy. He is survived by his wife, Betty McIntosh Grayson, of 56 years. Also survived by his three children, Melonie Hendricks (Joe) of Springfield, Melissa Murphy (Scott) of Springfield, Charles Grayson, II (Mary) of Maumelle, AR; his 3 grandchildren Derek Hendricks (Catherine), Emma Villareal (Jon), Grayson Murphy; his five great grandchildren; his sister, Joyce Faye Smith of Waxaw, NC; his nieces and nephews; and the rest of his family and friends. If so desired memorial contributions may be made to Oak Grove Baptist Church. Any donations may be sent in c/o Austin & Bell. Austin & Bell Funeral Home in Springfield is in charge of these arrangements. AUSTIN & BELL FUNERAL HOME- 509 WALNUT STREET, SPRINGFIELD, TN (615) 384-1000

The family of Charles Grayson created this Life Tributes page to make it easy to share your memories.

Send flowers to the Grayson family.