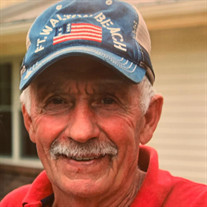 "Pops"-Age 71 of Cottontown went home to be with the Lord Wednesday, October 20, 2021 at St. Thomas West. He was born September 6, 1950 in Celina, TN to Milas & Dorothy McBride McClain. He was employed as a truck driver for Sharp Transport... View Obituary & Service Information

The family of Champ "Pops" Bennet McClain created this Life Tributes page to make it easy to share your memories.

&quot;Pops&quot;-Age 71 of Cottontown went home to be with the Lord Wednesday,...

Send flowers to the McClain family.