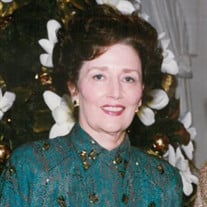 Carol Peeples Cook, of Springfield, Tennessee, died peacefully in her sleep on the morning of January 3, 2022. Ms. Cook, the daughter of Clayburn and Margaret Peeples, was born on June 10, 1937 in South Fulton, Tennessee, where she grew up and attended school. There, she was known for her beauty and her great intellect. She graduated from high school third in her class and was awarded the DAR good citizenship award. Carol was a cheerleader, active in the 4-H Club, and served as a member of the county poultry judging team which was named the best in Tennessee during her senior year. Following high school, Carol attended the University of Tennessee at Martin where she excelled as a student. After leaving UT Martin, she remained a loyal alumna of the University and was a generous donor for the remainder of her life. Carol was highly influential in the founding and early success of Nasco, Inc., a highly regarded fundraising and manufacturing company located in Springfield. Her extremely keen intellect and strong sense of civic responsibility led her to also volunteer and take leadership roles in many worthwhile organizations, including the Girl Scouts of America and both the Tennessee and the National Republican Party. Carol was extremely effective as an organizer, strategist, and prolific fundraiser for the Republican Party at both the state and the national level. She was appointed and served on the Federal Reserve Board by President Ronald Reagan. She also served as Finance Chairperson of the Tennessee Republican Party and was given the prestigious Statesman of the Year Award, presented by her good friend, the late Senator Howard Baker. Carol worked for the Tennessee Department of Transportation as Commissioner of Transportation and was also a former board member of the department. She was proud to be a member of a number of civic organizations in and around the middle Tennessee area, including in her hometown of Springfield, where she was known for her generosity and her strong sense of fairness and propriety. She would accept nothing less than perfection in everything she did. Her greatest love and deepest loyalties were to her family. She was proud of her family of origin and always went by the name, “Carol Peeples Cook,” to honor her parents. The oldest of six children, Carol loved all her siblings with a fierce and unwavering affection and loyalty, just as she did her two children and her numerous grandchildren and great grandchildren. She is survived by three sisters, Nancy Lester, Peggy (Joe) Johnson, and Jane Litchfield, and two brothers, Clayburn (Rhonda) Peeples, and David (Alice Ann) Peeples; a son, Keith Bradford (Joan) Cook, a daughter, Jayne Kay (Mark) Kimbrough; three grandchildren, Keith Bradford Cook, Jr., William Logan (Joanna) Kimbrough, and Jane Claire Kimbrough; four great grandchildren, Stella Pearl Cook, Ruby Dylan Cook, Georgia Carol Cook, and Audrey Kay Kimbrough. Austin & Bell Funeral Home in Springfield is in charge of these arrangements. AUSTIN & BELL FUNERAL HOME- 509 WALNUT STREET, SPRINGFIELD, TN (615) 384-1000

Carol Peeples Cook, of Springfield, Tennessee, died peacefully in her sleep on the morning of January 3, 2022. Ms. Cook, the daughter of Clayburn and Margaret Peeples, was born on June 10, 1937 in South Fulton, Tennessee, where she grew up... View Obituary & Service Information

The family of Carol Cook created this Life Tributes page to make it easy to share your memories.

Send flowers to the Cook family.