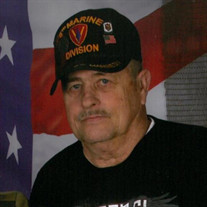 Carl Franklin Kelly, Sr., age 74, of Springfield, passed away Monday, August 30, 2021 at NorthCrest Medical Center. A graveside service will be held Wednesday, September 8, 2021 at 9am in the Middle TN Veteran’s Cemetery in Pegram. There will be no visitation prior to the graveside service. Mr. Kelly was born December 22, 1946 in Erie, PA to the late LaVergne F. and Williama Moodie Kelly. He was a veteran of the U.S. Marines and retired after serving 22 years as a mechanic, a career he loved. He loved his family, reading, and M&M’s. In addition to his parents Mr. Kelly is preceded in death by his son, Brian Kelly, his grand-daughter, Haven Ray, and his brother, John Earl Kelly. He is survived by his wife, Janice Harris Kelly; children, Carl (Rebecca) Kelly, Jr. of HI, Daniel Kelly of Bellvue, and Denise (John) Ray of Springfield; grandchildren, Rachel Kelly, Hannah Kelly, Alexis Kelly, Madison Kelly, Katelynn Kelly, Christopher Locke, Austin Kelly, Veronica (Nolan) Simmons and Taylor Ray; and great-grandchildren, Jaxson Simmons and Kaiden Kelly. If so desired memorial contributions may be made to Toys for Tots. Any donations may be sent in c/o Austin & Bell. Austin & Bell Funeral Home in Springfield is in charge of these arrangements. AUSTIN & BELL FUNERAL HOME- 509 WALNUT STREET, SPRINGFIELD, TN (615) 384-1000

Carl Franklin Kelly, Sr., age 74, of Springfield, passed away Monday, August 30, 2021 at NorthCrest Medical Center. A graveside service will be held Wednesday, September 8, 2021 at 9am in the Middle TN Veteran&#8217;s Cemetery in Pegram. There... View Obituary & Service Information

The family of Carl Kelly, Sr. created this Life Tributes page to make it easy to share your memories.