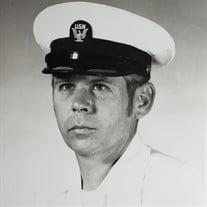 Eric “Bud” Brian Van Camp, age 77 of Clarksville passed away Thursday, May 7, 2020 at Vanderbilt University Medical Center. Funeral services will be held Tuesday, May 12th at 1 o’clock pm in the chapel of the Austin & Bell Funeral Home in Springfield. Burial will be at Riverside National Cemetery in California at 12:00PM on Monday, May 18, 2020. The family will receive friends at the funeral home on May 12th from 12 NOON until the hour of service at 1:00PM. Mr. Van Camp was born December 7, 1942 in Ypsilanti, Michigan to the late George and Julia Schafer Van Camp. He was retired after 20 years with the U.S. Navy and a veteran of the Vietnam war. He was a life member of the VFW and the American Legion. In addition to his parents, Mr. Van Camp is preceded in death by his son, Darrel Charles Van Camp. He is survived by his wife, Mary Van Camp; sons, Michael Van Camp, Brian Van Camp; daughter, Stacey Lynne Weeks; daughter-in-law, Yvonne Murawski; brother, Dennis (Mindy) Van Camp; sister, Cheri (Neil) Butschke; grandchildren, Jamie, Darrel and Michael Murawski, Shawn Grierson, Megan Hinton, Ashley and Charley Van Camp, Carissa Burke; and eighteen great-grandchildren. If so desired memorial contributions may be made to U.S. Navy Memorial at 701 Pennsylvania Ave. NW, Washington D.C. 20004. Austin & Bell Funeral Home in Springfield is in charge of these arrangements. AUSTIN & BELL FUNERAL HOME-509 Walnut St, Springfield, TN 37172 615-384-1000

The family of Bud Van Camp created this Life Tributes page to make it easy to share your memories.