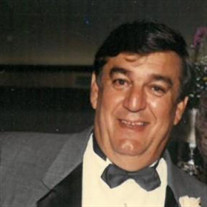 Bobby Wayne Wooten, age 84, of Gallatin, passed away Sunday, January 9, 2022 at the Skyline Medical Center in Nashville. A Memorial Service will be conducted at 1pm Saturday, February 19, 2022 in the chapel of Austin & Bell Funeral Home, Springfield. The family will receive friends from 11am until the time of service at the funeral home. Mr. Wooten was born March 13, 1937 in Springfield to the late Marvin Gilbert Wooten and Lucille Fletcher Timmons. He was raised in Adams and went to Jo Byrns and played all sports and was recognized as one of the “Players of the Century” in basketball. He played football for the Austin Paye Governors and in 1959 he joined the Army and played football with the Screaming Eagles with the 101st Airborn. Mr. Wooten coached 3 years for the Babe Ruth Senior League in Springfield and also was an Assistant Coach at Springfield Jr. High under Coach Wayne Shoemaker for 2 years. He also owned many business throughout his life including B&P manufacturing and distributing company. He had a love for his family and friends and a passion for sports. In addition to his parents, Mr. Wooten was preceded in death by his wife, Patricia A. Wooten; daughter, Stephanie R. Shaver; a son, Greg Wooten; and sisters, Elizabeth Thaxton, Shirley Reeves and Virgie Cogbill. He is survived by daughters, Bobbie L. Wooten, Cindy (Jo) Guinn, Valerie (James) Ward, and Jheri Beth (Mike) Haseltine; son, Russell (Tina) Wooten; a brother, Marvin (Sharon) Wooten; 11 grandchildre, 8 great grandchildren, and 1 great great grandchild. He will also sadly be missed by Dwight Guinn, Hollie (Saul) Sadler, Dylan Guinn, Kaden Sadler, Bella Sadler, Tyler (Cierra) Lumsden, and John Luke Lumsden. The family would like to say a “Special Thank You” to Lifecare Foundations. Austin & Bell Funeral Home in Springfield is in charge of these arrangements. AUSTIN & BELL FUNERAL HOME- 509 WALNUT STREET, SPRINGFIELD, TN (615) 384-1000

Bobby Wayne Wooten, age 84, of Gallatin, passed away Sunday, January 9, 2022 at the Skyline Medical Center in Nashville. A Memorial Service will be conducted at 1pm Saturday, February 19, 2022 in the chapel of Austin & Bell Funeral Home, Springfield. The... View Obituary & Service Information

The family of Bobby Wayne Wooten created this Life Tributes page to make it easy to share your memories.

Send flowers to the Wooten family.