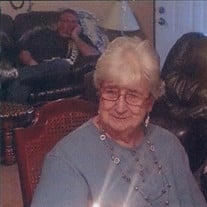 Age 81 of Kingston Springs, TN, formerly of Madison, TN passed away June 14, 2016 at her home. She was born April 21, 1935 in Brookwood, AL to William A. and Ruby Montgomery Cate. She worked as an Administrator for Bell South before her retirement.... View Obituary & Service Information

The family of Billie Ruth Conroy created this Life Tributes page to make it easy to share your memories.

Send flowers to the Conroy family.