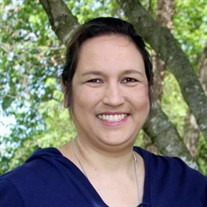 Barbra Belinda Marielle Fetzik (Teunisse), born February 7, 1966 in Nijmegen, The Netherlands has left this world and moved on to the next. Beloved wife of Henry Fetzik, daughter of Christiaan and Renee Teunisse (Pieters) (deceased October 2019), mother of Charlotte S.E. Teunisse and loving sister of Harold H. Teunisse, Patricia A. Teunisse and Nicole D. Teunisse. Barbra leaves behind numerous nieces and nephews in both California and in Tennessee who were blessed with her loving presence in their lives. Barbra was a reliable and loving para educator who served children in need in both the San Gabriel, California region and the Nashville, Tennessee region for over two decades. Barbra and Henry shared a beautiful home, which they planned and built together, in Cedar Hill, TN. Barbra was dedicated to service in all aspects of her life. She was a long time Girl Scout Leader where she was known by her camp name, Dancing Horse. She led a number of troops, including one for children with disabilities, for which she received a service achievement award from the Spanish Trails Girl Scout Council. She planned and executed a number of summer camps, including the annual Sizzyaliatcha camp at the Los Angeles County Fairgrounds in Pomona, California. Barbra graduated from Northview High School, in Covina, California, class of 1984. She was named the Floyd Myrick most promising freshman of 1981, a three- sport varsity athlete and class president. She also attended Citrus College in Glendora, California and played basketball for the Owls. A talented artist, Barbra graduated from the California State University at Long Beach with a bachelor’s in fine arts. She put her talent to good use throughout her life creating many amazing works of art, some of which hang in the homes of her family in the Netherlands as well as in California and Tennessee. Her joy for life can be seen in the beautiful works of art that she created and through which she remains with us always. Funeral services will be conducted at Austin & Bell Funeral Home in Pleasant View on Friday, June 18th at 10:00AM with Bro. Tom Payne officiating. Burial will follow at EverRest of Cheatham with Wayne Helm, Wayne Helm, III, Tony Carr, Harold Teunisse, Nathan Carr, and Garrett Latham serving as pallbearers. The family will receive friends at the funeral home on Friday from 9AM until the hour of service at 10AM. If so desired, memorial contributions may be made to Stroudsville Church of Christ Children’s Ministries, 1531 Stroudsville Road, Adams, Tn. 37010 or Spanish Trails Girl Scout Council at https://www/girlscoutsla.org/.

Barbra Belinda Marielle Fetzik (Teunisse), born February 7, 1966 in Nijmegen, The Netherlands has left this world and moved on to the next. Beloved wife of Henry Fetzik, daughter of Christiaan and Renee Teunisse (Pieters) (deceased October 2019),... View Obituary & Service Information

The family of Barbra Fetzik created this Life Tributes page to make it easy to share your memories.

Send flowers to the Fetzik family.