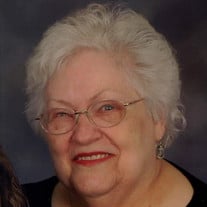 Artie Marie Rawls Brown, age 81 of Greenbrier passed away Wednesday, March 28, 2018. Austin & Bell Funeral Home Greenbrier 2619 Hwy 41 S., Greenbrier, TN is in charge of arrangements. The family will receive friends 4pm to 8pm on Monday, April 2nd and 9am to 11am on Tuesday, April 3rd at Austin & Bell Funeral Home Greenbrier. The funeral service will be at 11am on Tuesday, April 3rd at the funeral home with Rev. Randy Harman and Rev. Frank Evans officiating. Burial will follow in Rock Springs Cemetery. She was born in Greenbrier, TN March 23, 1937 to the late William M. and Mary Hackney Rawls. She was also preceded in death by her husband, Donald Brown; son, Michael Brown and a brother, Porter Rawls. She was married to (Army/Ret. MSG) Donald Brown on June 25, 1953. Together they served 24 years before his retirement. They lived in Germany 5 1/2 years during that time. She was a Cafeteria worker at Barksdale Elementary School in Clarksville for 3 years and Cafeteria Manager at Greenbrier Elementary for 21 years. She volunteered for NorthCrest Auxiliary, was a member of Greenbrier American Legion and was a Gold Star Wife. She was a member of Rock Springs Baptist for 40+ years. She is survived by daughter, Donna (Geary) Fryer; brother, Lanier (Beverly) Rawls; grandchildren, Kayla Fryer Clinard, Jason (Amy) Fryer, Kirstie Brown, Kayleigh Brown; great-grandchildren, Ava, Katon, Jackson and Asher. Family and friends will serve as pallbearers. In lieu of flowers, contributions may be made to Rock Springs Baptist Church, 2155 Rock Springs Road, Greenbrier, TN 37073. Online condolences may be made at www.austinandbell.com

The family of Artie Marie Brown created this Life Tributes page to make it easy to share your memories.

Send flowers to the Brown family.