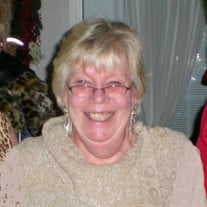 Anne Marie Bussel Adams, age 60, of Old Hickory, passed away Monday, November 28, 2016 at Summit Medical Center. Funeral services will be held Friday, December 2, 2016 at 1pm in the chapel of the Austin & Bell Funeral Home in Springfield. Burial will follow in the Dunn Cemetery with Paul Eschbach, Jr., Brian Adams, Timothy Eschbach, Mark Eschbach, Kevin Adams and Justin Adams serving as pallbearers. Visitation will be held at the funeral home on Wednesday, November 30, 2016 from 4-8pm, on Thursday, December 1, 2016 from 4-8pm and on Friday from 10am until the hour of service at 1pm. Mrs. Adams was born March 6, 1956 in Pontiac, MI to the late John and Maxine Eschbach. She worked as a travel consultant and was of the Catholic faith. In addition to her parents Mrs. Adams is preceded in death by her adopted parents, Walter and Jean Mendenhall Bussel, her brothers, Donnie Eschbach and David Eschbach and her granddaughter, Angelica Stevenson. Mrs. Adams is survived by her husband, James “Ricky” Adams; daughter, Kristi Pegg of Old Hickory; brothers, Paul (Tempie) Eschbach of Goodlettsville and Richard Eschbach of Greenbrier; sisters, Rhonda Dunn of Bon Aqua and Barbara (Kenny) Kelly of Ashland City; grandchildren, Hailey and Christopher James “C.J.” Stevenson; and many loving nieces and nephews. Austin & Bell Funeral Home in Springfield is in charge of these arrangements. AUSTIN & BELL FUNERAL HOME- 509 WALNUT STREET, SPRINGFIELD, TN (615) 384-1000

The family of Anne Marie Adams created this Life Tributes page to make it easy to share your memories.

Send flowers to the Adams family.