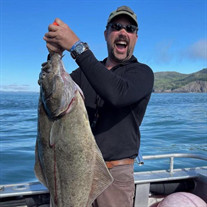 Andrew Jonathan Sikora, age 42 of Cedar Hill, Tennessee, passed away Monday, April 18, 2022 at his residence surrounded by his family and friends. Funeral Mass will be conducted at St. Ann Catholic Church, 5101 Charlotte Ave, Nashville, Tennessee at 10:30AM on Saturday, April 23rd, with Father Michael Fye as Celebrant. Burial at sea will be at a later date. John Sikora, Eric Cline, Lopaka Bounds, Justin Jenney, Sonny Lethcoe, Jayson Remfert, Tony Vaughan and Tim Sikora will be serving as pallbearers. There will be no visitation prior to the funeral mass. Andrew was born on February 11, 1980 in Lorain, Ohio to John & Stephanie Cline Sikora. He grew up on Lake Erie which was the start of his love of the water and boating. His family later moved to Ashland, Ohio where he graduated from Ashland High School in 1998. After high school, Andrew enlisted in the United States Marine Corps and served with the 2D RECON Battalion. Following his USMC service, he graduated from The Fisher College of Business, The Ohio State University all the while serving as a Load Master and Sensor Operator Trainer with the United States Air Force Air National Guard. He was employed by Force X as a program manager in Nashville, TN. Andrew had a personality that was larger than life. He walked into a room and captivated his audience with his infectious personality, humor and smile. Andrew was a person who lived life with great passion; which showed throughout; in his dedication to work, his beloved family, friends, country and as a member of the Knights of Columbus at their church; St. Ann Catholic Church. Andrew spent his free time covered in diesel grease, tinkering with his trucks, tractors, classic car, or in the haul of his boat. He lived his best life in the mountains on his snowboard or speeding around on his boat, being silly with their 4 daughters, shooting guns, hunting with Kimber, paling around with his dad- simply living and loving life fiercely surrounded by those he loved most in his life. In addition to his parents, he is survived by his wife, Alicia Sikora; daughters, Kairi, Maryanne, Lily, and Andi Sikora; sister, Allison and Eric Cline; 3 nieces and all his Marine Corps brothers including; Lopaka Bounds, Justin Jenney, Eric Cline, Uncle Tim Sikora. If so desired, memorial contributions may be made to St. Ann Catholic Church or to his wife Alicia for their girl’s future fund. AUSTIN & BELL FUNERAL HOME in Pleasant View is in charge of these arrangements. 6316 Highway 41A, Pleasant View, Tennessee 37146 (615) 746-4433 www.austinandbell.com

The family of Andrew Sikora created this Life Tributes page to make it easy to share your memories.

Send flowers to the Sikora family.